So here I am in New York at last. It’s Day 5. I’ve had no jetlag at all – probably something to do with having to hit the ground running, but then I’ve only really ever had bad jetlag in Australia.

My apartment is in Brooklyn and you will be relieved to know I am very well off for Places of Worship. God is doing very big business here. Within a short walk I can attend the Bethel Baptist Church which boasts the Triune God and seems to have a lot of Bishops advertised out front. I could also potter off to the Mosaic Baptist Church, the Full Gospel Assembly of God, the Church of God Prophecy, both the Bethel Church of the Nazarene AND the Beulah Church of the Nazarene, the Berean Baptist Church and the Temple of Blessings. Plus, should I so be inclined, there are 4 synagogues, one Holy Roman church and any amount of more ordinary Presbyterian and Protestant churches.

Oh, and there is also an Interfaith Dental Centre which has set me wondering… Do they treat atheists? What might an Interdental Faith Centre offer – the pious belief that one can do without flossing? Who knows.

On the other hand, it took me until yesterday to find a Laundromat and a decent grocery store. Thus I have thanked the instinct that made me pack 48 pairs of knickers and every pair of jeggings I have ever owned. And I have been living off the various items of food which previous occupants of my apartment have abandoned. I had no idea that a tin of sardines chopped and stirred into farfalle with a dash of Tabasco would be quite so delicious.

In truth, I haven’t really done very much at all. On my first night I went to stay with old pals, Fern and Deb, who welcomed me back like the prodigal daughter. We sat up nattering till late over herbal tisane (yes, my choice, in spite of the fine wine Fern had laid in for me!) and Deb sorted out my new iPhone.

Yes, I said those words – my NEW iPhone. Oh, that was but one of the many technical issues that has dogged me over the past days, the iPhone nightmare. Shall I just run you through the horror of my recent meltdown?

26th May – We go away with family for a “restful” weekend at a self-catering place near Tewkesbury. I have a little work to do – but it takes hours because my laptop is behaving oddly. The keyboard stops responding – twice – fekk! Mail closes when I send an email.   The Macbook is old, old, old. Did you know you can calculate a computer’s age in human years? For the first year, a computer year is equal to 6 human years. After that, each computer year equals 17 human years, multiplied by itself in the third year, and cubed each following year. This calculation is based on studies that indicate computers, particularly laptops, ossify more quickly as the years go on. According to this calculation, my laptop was older than Christianity. I ring Simon, my Mac doctor, and after a brief chat, order a new Macbook.

27th May – I get some work done and my laptop occasionally connects with the perfectly functioning wifi (all other devices work just fine) so at least some of the work gets to the right destination.

28th May – Cannot connect with wifi. My iPhone is also going down the Swannee – flashing and flickering, opening apps and making calls by itself, and touch screen unresponsive. I manage to call old pal Judy who lives nearby and drop in to her place to send documents which must be sent to NYC today! Laptop wifi doesn’t work there either, but at least a memory stick means she can send the documents.

29th May – Abandon all attempts to use either laptop or phone. Knives are hidden from me in case of violence.

31st May – Drop old laptop off with Simon who is going to set up new laptop and transfer all the information. Drop off iPhone to Sam, the phone man, who is going to replace the broken glass which is being blamed for the flashing etc. Go home to get as much work done asap with Julie, my PA who is waiting for me, to find that the storms have blown out all the electricity in the village. No desktop, no wifi and no landline. I decide to do some urgent gardening before leaving said beloved garden for a month. The skies open. I bury my head in my hands and weep.

1st June – To London for hairdressing and last rehearsal. My iPhone, collected yesterday evening, seems to be working ok.

2nd June – Pack for a month away and also for niece’s wedding. Logistics rather taxing. Take delivery of shiny new laptop. Simon has done wonders. I experience a glow of Happiness. Drive to The Wilds Of Norfolk to attend wedding of Beloved Niece.

3rd June – Wifi doesn’t work where we are staying. It doesn’t work for John either, so I manage to stave off Paranoia. My iPhone has started flashing again, however. I give up.

5th June – We say our farewells sadly, and head for the airport. The iPhone is now only usable for about 47 seconds at a go. Quite frankly, it’s gone berserk. At the airport I bite the bullet and purchase a new iPhone at vast cost. And no, I’m not due an update till… fekk… September…

So there you have it. My tech meltdown nightmare crisis spiral. Thus I have spent most of this week answering a backlog of emails. And, thank God, my pal Deb (who works for Apple and thus is In The Know) said I did the right thing to buy a new iPhone, my old one would have been beyond repair.

Oh – before I go – I forgot, you might want to know about the show! It’s going fine. I’m in preview week. Audiences are growing and very fulsome afterwards and bless them, they are buying the CDs which is always a good sign. Meantime, it’s the Tony Awards on Sunday, NYC theatre world is in freeze mode, and reviews won’t be published until some time next week when there’s a chance that people might actually read them.

And it’s just lovely being back at 59E59. Such a great venue, such nice people, and such impressive backup.

So now I am off to Do Something With My Day. Otherwise my next blog will be all about sardines & farfalle.

Lovely flowers from my producers, David & John, and Jaimondo 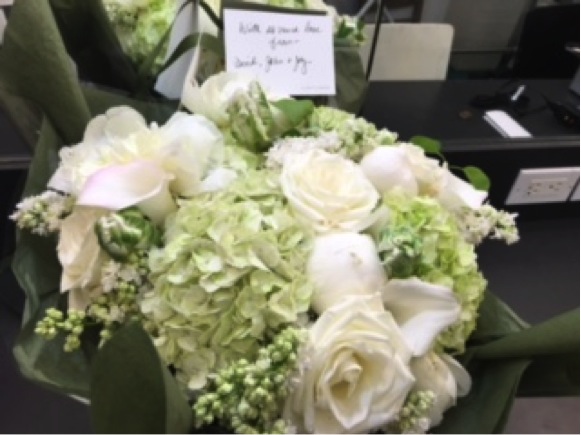