If we were playing the word association game and I said the word “jungle” to you, what words would you come up with? Warm? Hot? Sweaty? Sultry? Perspiration? Heat induced-languor? Muggy? Prickly heat? Mosquito? Sweltering?

I searched the long-range weather forecast for every individual place on our itinerary just a couple of before I left and it predicted, as I mentioned before, temperatures of 19-23 degrees. And of course, it was brass fekking monkeys when we arrived. I had not factored in the prospect of the drives starting at 6am and it is perishing then. Once again, John and I were inadequately dressed. We had no idea India might be cold. It comes from a lifetime of watching British TV dramas where limp Memsahibs yearn for the cool hills of Simla. I gave in to force majeure and purchased a perfectly ghastly hoodie from the shop, but John couldn’t find anything to his taste. Or that he could actually zip up.

Thus we left for our first drive with me feeling relatively cosy, all muffled in hoodie, jumpers, scarves etc, and His Lordship, a.k.a. Le Chevalier du Lion Rouge, beside me all dressed up as a gay boulevardier in jaunty check shirt, best green cashmere v-neck (I dare not think how many times he’s worn it since Blighty) and pale green linen jacket. All he needed was a malacca cane and he was ready for a light lunch in Cannes on a pleasant spring day. Somehow, the little brown blanket and hot-water-bottle thoughtfully provided by our hosts didn’t make up the balance of warmth wanting, and his customary healthful pink we all know and love gradually took on an indigo tinge as he slowly froze.

Over supper that night, I could see that the thought of another early morning drive was filling our gay boulevardier with dread, so I dragged him back to the shop and he squeezed himself into a slightly undersized top and thus we left on our second morning in identikit, unisex, matching hoodies. Yes, me and John in unisex jackets – it’s a horrible thought and worse in reality. I resembled Worzel Gummidge’s mother and Himself was dressed as an out-of-work brickie. It’s not a good look, but I haven’t laughed so much since Mr. Pastry was on tv. 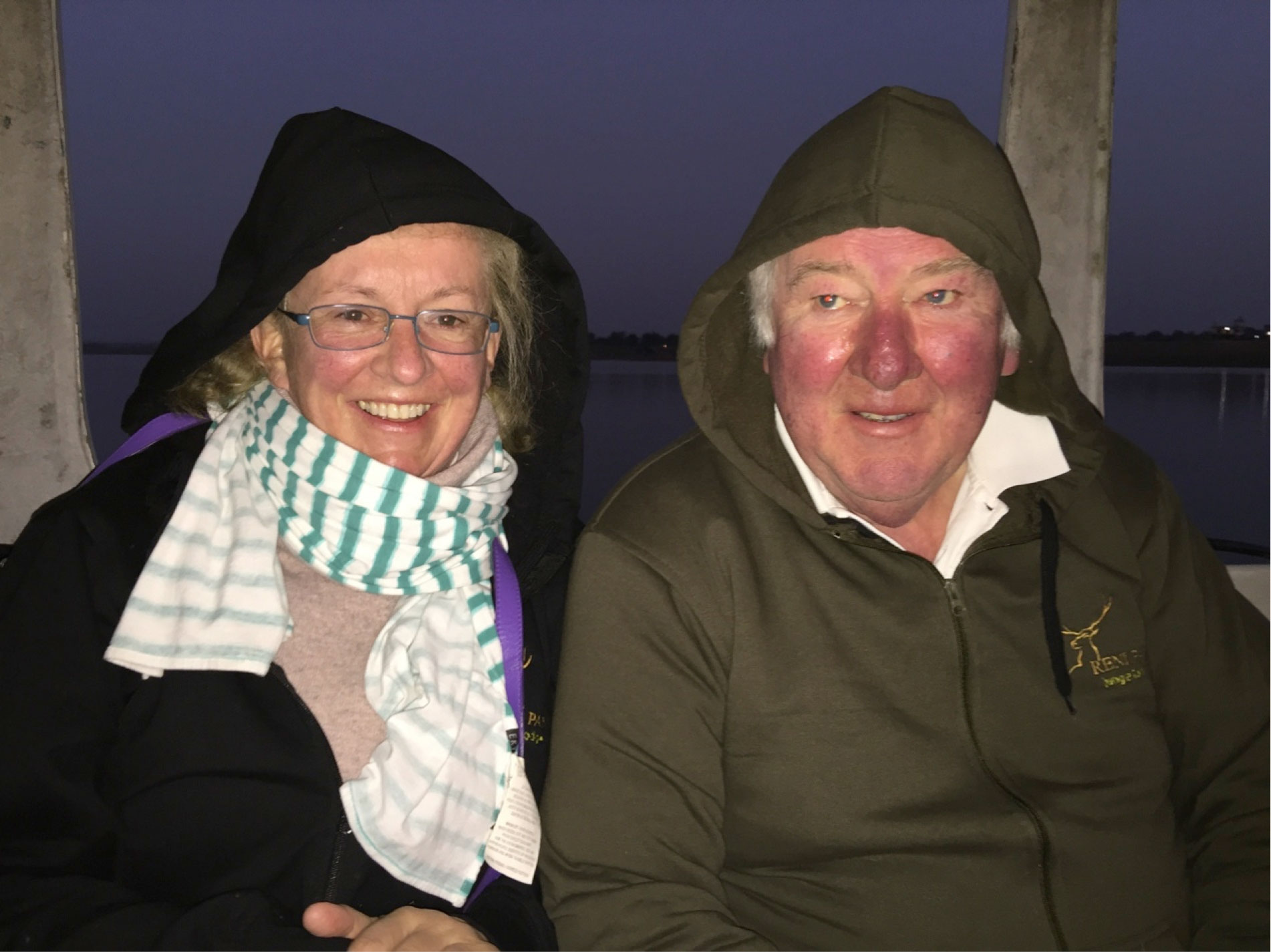 As to the animals… again, what does the word ‘jungle’ suggest to you? Dense? Impenetrable? Indeed. Though the jungle is dry at this time of year, it is thickly vegetated, so seeing anything at all is a bit of a bonus.

Having done an Africa safari a couple of years back, this is disconcerting at first. Our African reserve was chocabloc with large social groups of elephants, lions, ungulates and whatnot. The savannah is relatively open, the beasts are big and either pop up above the trees, like giraffes, or are unmissable hulks, like the hippopotami and rhinoceri. In India, the vegetation is thick and the animals tend not to live in large social groups. The cats are solitary and secretive, the antelopes are shy and live in small groups, and the monkeys are at the top of the fourth tree to the left, back a bit, no, third tree into the forest, oh bugger, they’ve gone.

At first, therefore, the Indian jungle seems like a woman in purdah, there behind the screen, but invisible and secret, and you remember Africa as if it were Elizabeth Taylor dressed as Cleopatra, resplendent and magnificent in all her glory. Then little by little, India shows you her jewels, and her beauty and fascination grow on you by stealth, making Africa seem vulgar and gaudy by comparison.

As to what I hoped for here in Reni Pani, well, it’s all about managing expectations, and I’ve always been pretty good at this. Years ago, when Fascinating Aïda were the new kids on the block and doing interviews all over the place, a journalist came to interview me.

“Finally, what’s your ambition?” he asked.

“To own a washing machine,” I replied.

“No, seriously,” he said. “Surely you want to play the Albert Hall?”

“Ah,” I said crisply, channeling my inner Margaret Thatcher. “You’re confusing ambitions with dreams. I might dream of playing the Albert Hall, but my immediate ambition is to end my dependence on the launderette. After that, I shall aim for a flat of my own. It’s all about managing expectations, you know!”

Thus I came to Reni Pani confident in the knowledge that I would NOT see a tiger. I didn’t, and I was not disappointed.

Anyhow, here’s a list of what we did see.

The Dowager Duchess of Gaur

And you haven’t come yet,

And look at the time? Half past four!”

Jeremy Corbyn was the least surprising sighting, because the world suddenly seems to be full of weedy men in late middle age attempting to bring interest to undistinguished features with a tighly clipped white beard. Anyhow Jeremy was in the next jeep with a camera big enough to photograph the Duchess of Cambridge’s tits from 457 miles away, and he was jolly annoying with his constant clicking. His travelling companion, who surprisingly turned out to be female, was the dead spit of Woody Allen and equally dolorous of mien. We talked to them briefly,

“Big camera,” said John, the eejit who arrived in India with just his Samsung phone with which to record his epic trip.

“Yes, ze camera is a big hobby of mine. Ve are biologists from Switzerland.”

“A volf? You saw a volf?!!!” Jeremy’s jaw dropped. “Ve did not know zere vere volves here, and ve are biologists!”

“Oh, they’re very rare,” said John, with added insouciance. “Dillie got a couple of great photos on her camera.” This was enjoyably naughty, particularly as John had spent our entire bird-watching boat ride taking selfies as his phone was switched round the wrong way.

I nodded with rueful smugness. “Just on my little camera,” I said, patting my small handbag indicating just how small and shite my camera must be if it could fit inside said handbag.

There was a moments silence, as he frothed with envy, hate, misery and a number of other complex emotions. Then he spoke again.

To our complete hilarity, this turned out to be utter nonsense, as our guide, Erwin, said there weren’t nine bears in the part of the park they’d been in, and all the guide, spotters and drivers immediately compare notes on what they’ve seen the minute they meet. Nine bears is impossible because they’re territorial. Oh, there’s fierce competition between us tourists.

But here is my wolf. I was so happy to see her. 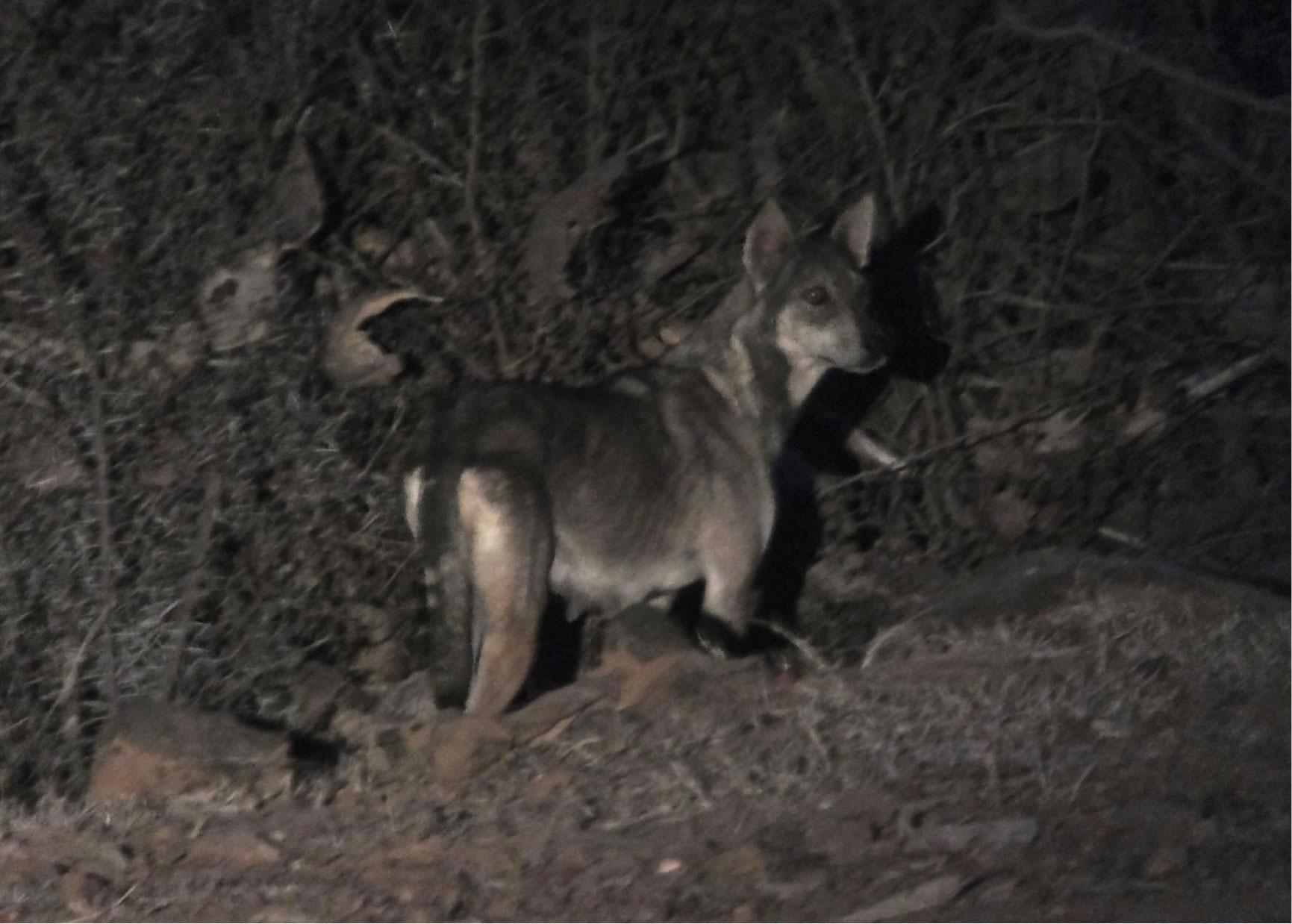 The elephant is absolutely essential in managing the cat population. Tigers and leopards don’t fear them, and an elephant can get up close to a cat without alarming them. They can also get into very densely forested areas that a landrover can’t reach. The mahout and the naturalist ride into the thick of the jungle to literally within a couple of feet of a resting tiger, and the naturalist will shoot a tranquiliser into the beast. They then have up to ten minutes to take all the measurements, paw prints, photographs, perhaps collar the animal with a tracking device etc., then they have to get out. A stronger, longer-lasting tranquiliser might kill.

Tigers have been seen in Bhopal, sadly: caught on home CCTV and prowling around the suburbs. Better than sending out armed posses, the elephants and their mahouts are there, quietly plodding around the sites where they’ve been sighted. With careful planning, the tigers will be taken back to Satpura National park and relocated. It’s not without its risks – they have to decide where to relocate the tiger so that it isn’t competing with another, but better that two tigers fight for supremacy than mayhem in the suburbs.

We had four nights and three full days in this entrancing place. The jungle itself is enthralling. Every few hundred yards, the vegetation changes: the canopy thins out, or the undergrowth alters. Dense jungle gives way to lighter growth. Suddenly you’re in the open, overlooking a large rocky canyon. Even when you haven’t seen an animal for an hour, the jungle is consistently riveting.

The cherry on the cake was Erwin, our guide, a young man of 26 who was the most brilliant company as well as a phenomenal naturalist. It was fascinating to see how every one of his senses was completely alive to the forest around him. Every rustle means something, grass waving slightly or branches moving indicates animal life, he scents a kill long before the tourists smell it, and knows every call and cry and what they all signify. He hears the alarm call of the sambar deer, and we hurtle off in that direction, jouncing crazily in our jeep. And he’s not just trying to please two dopey tourists in identikit jackets, he’s desperate to see whatever it is himself and his enthusiasm is just brilliant. 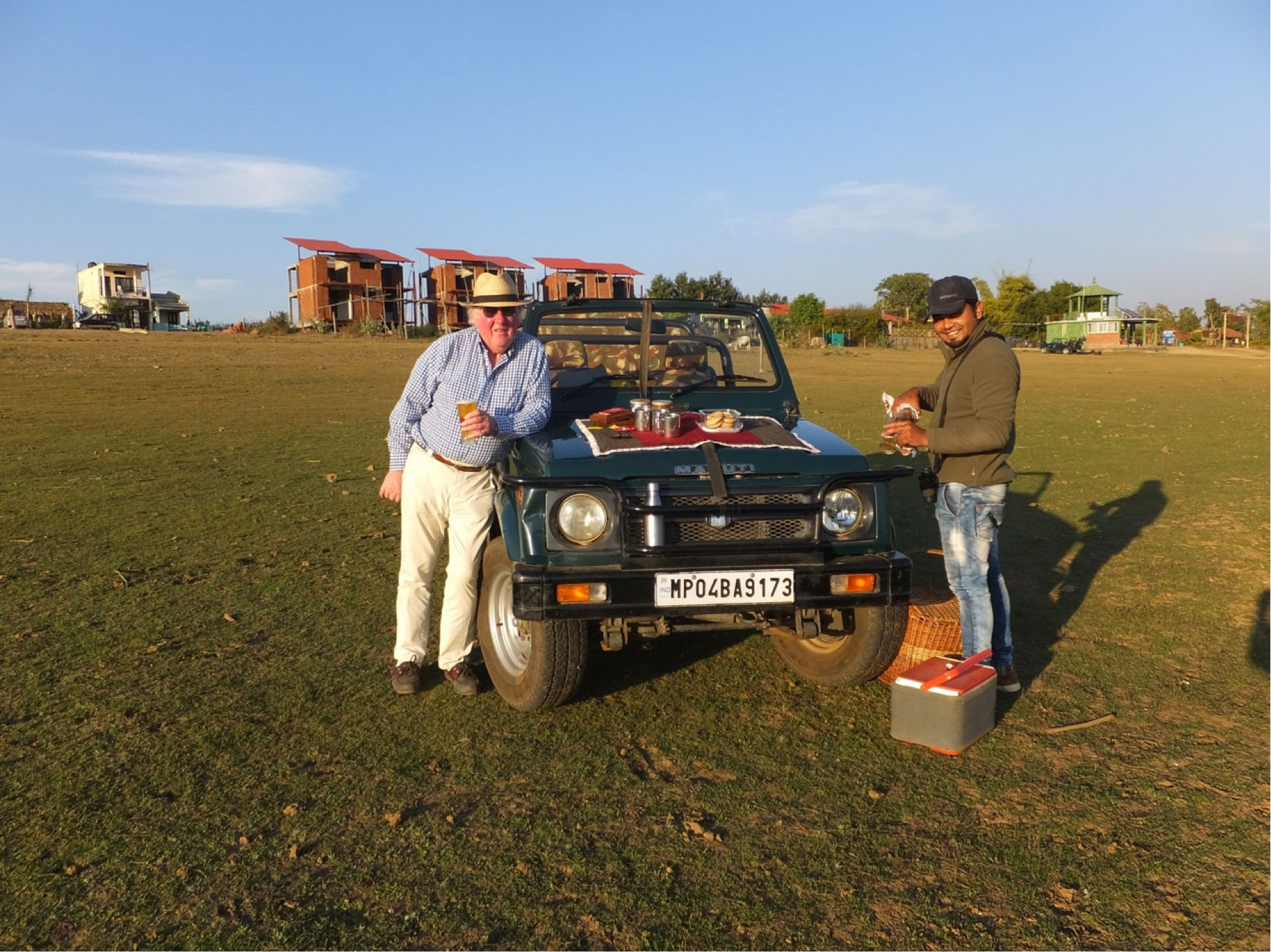 John and Erwin relax with a beer.

So if nothing else about these over-long missives tempts you to come to India, I would hope that you’d give this place some thought because I’ve just had three of the best days of my life here. Gee, I was sad leaving.

That tells you everything. 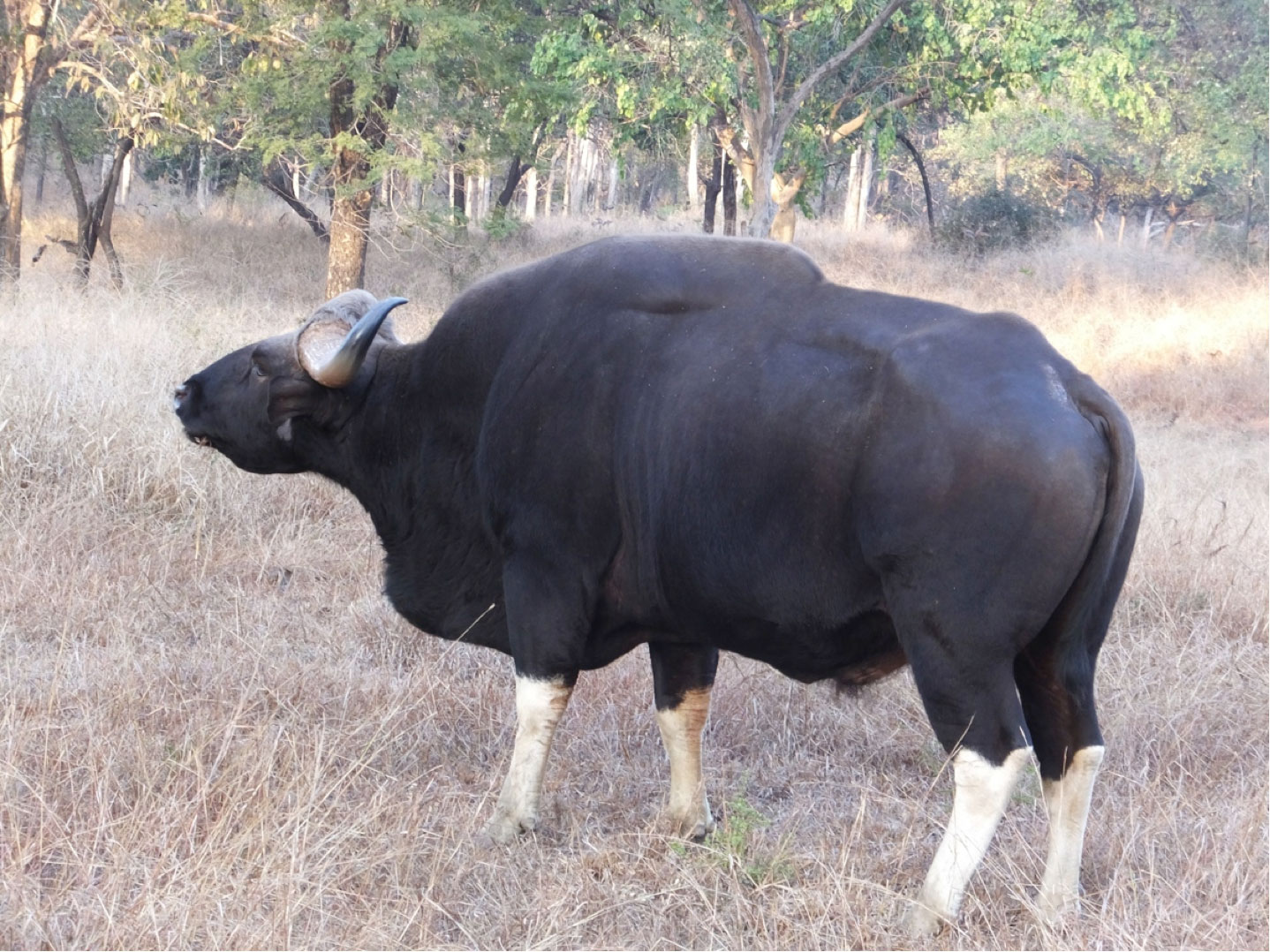 The Dowager Duchess of Gaur 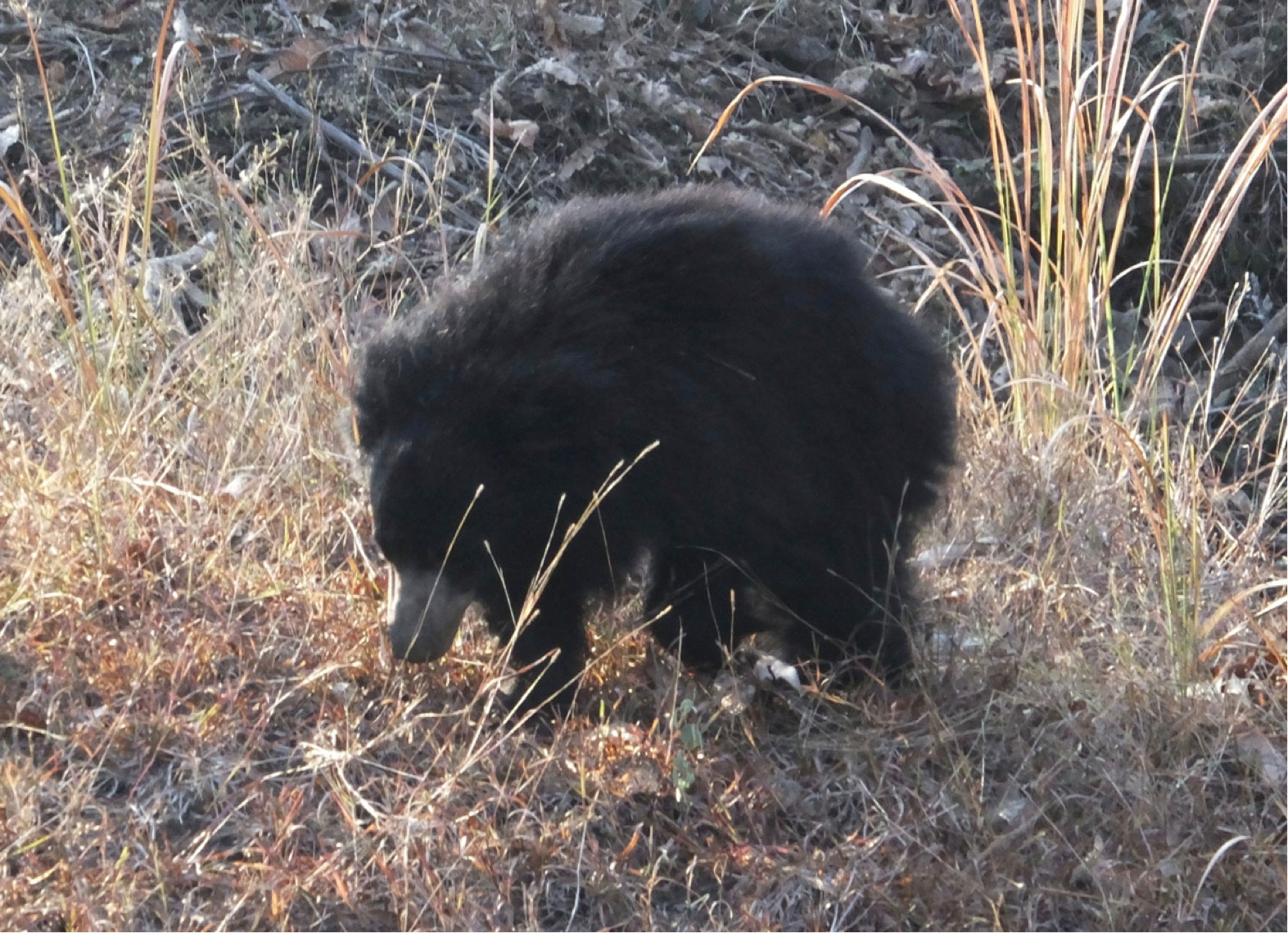 Well of course, this is a bear. 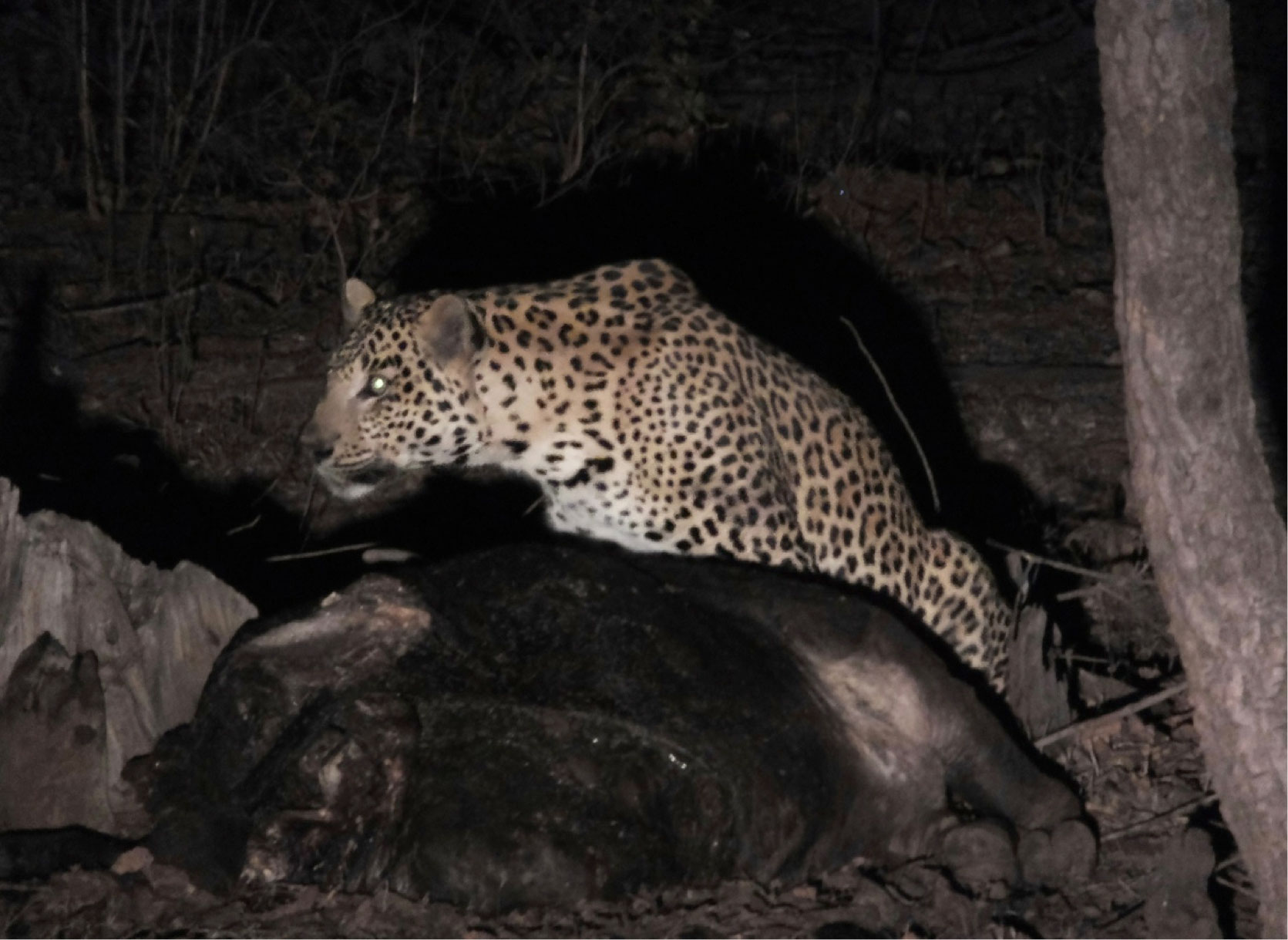 Leopard at a kill 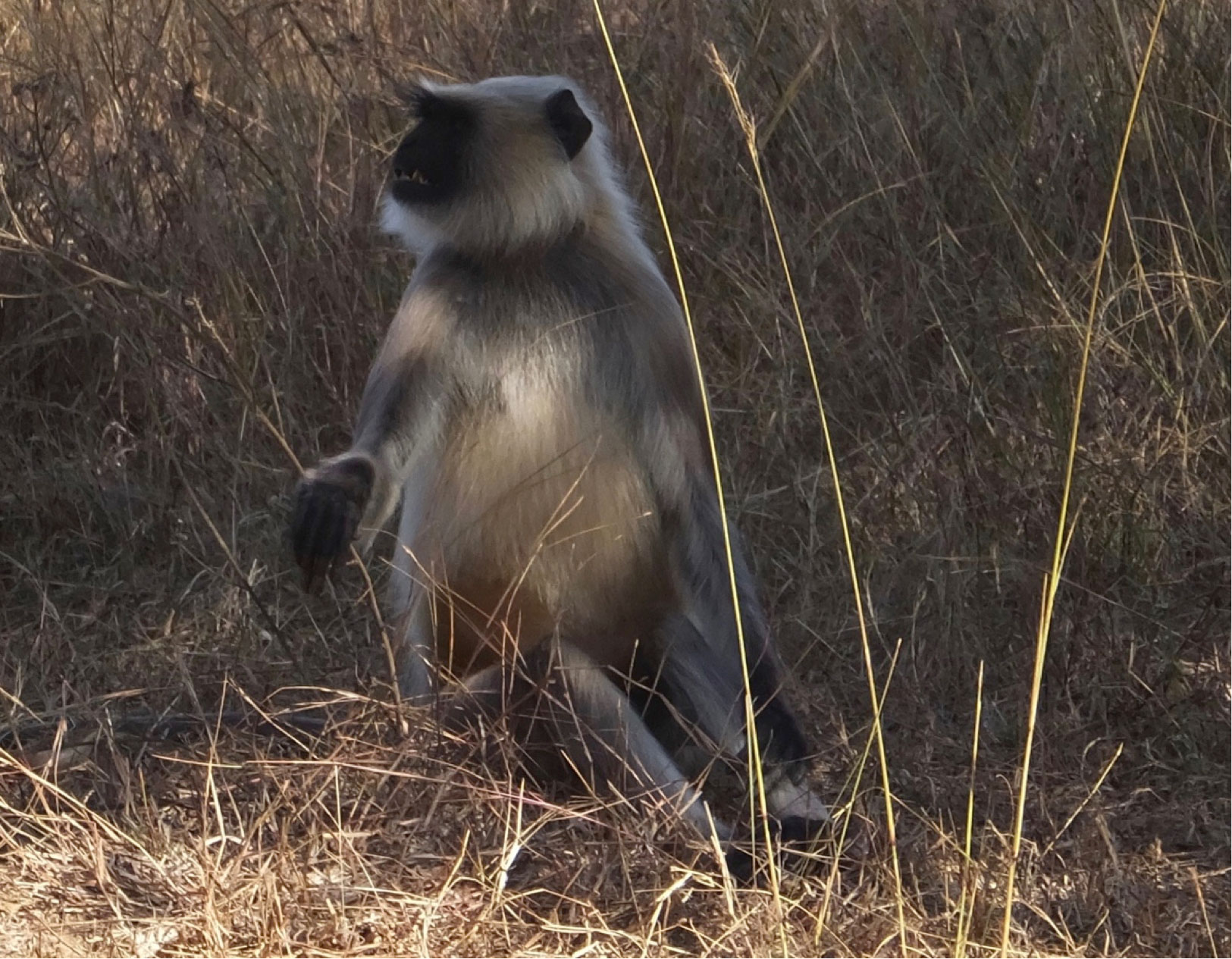 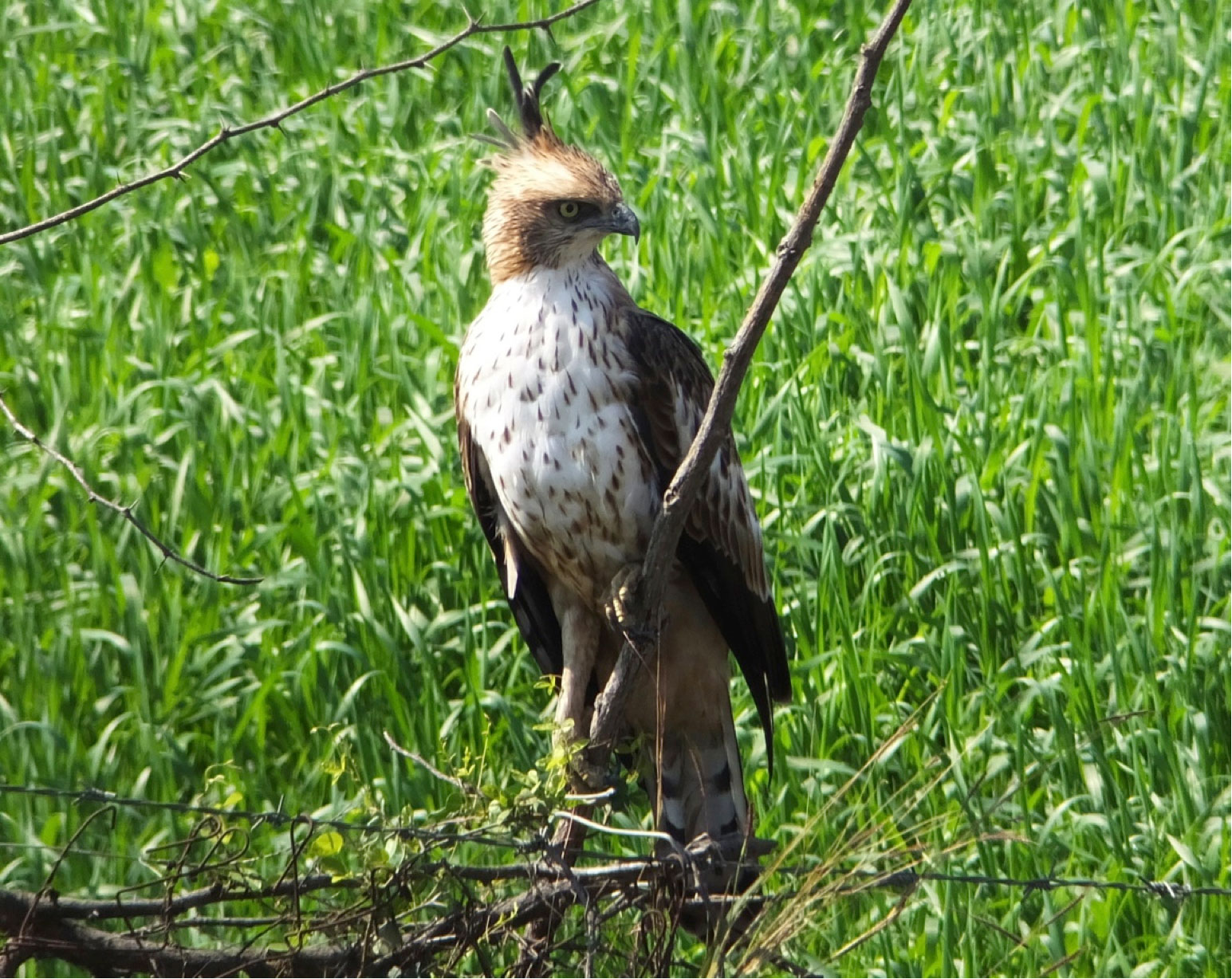 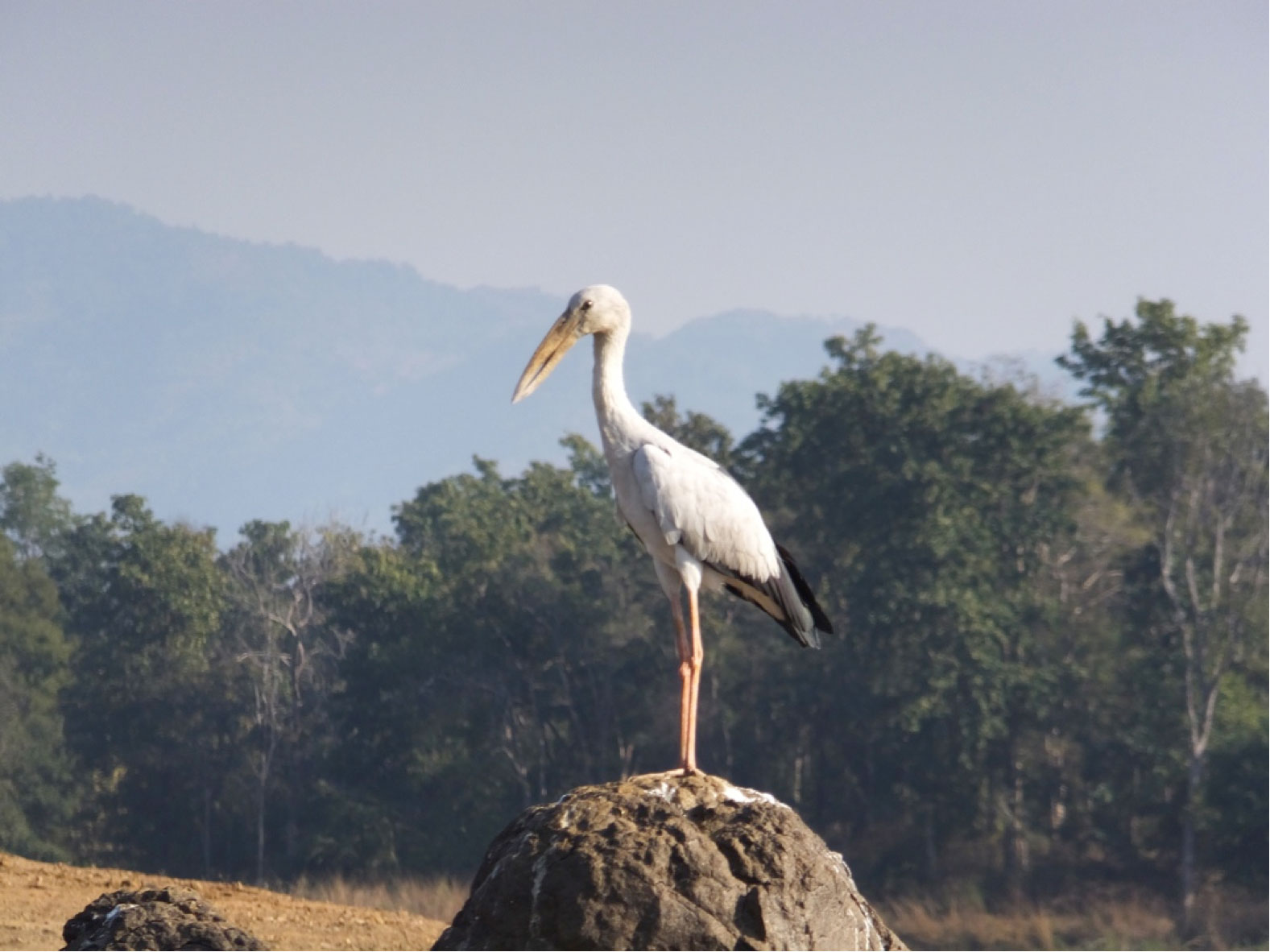 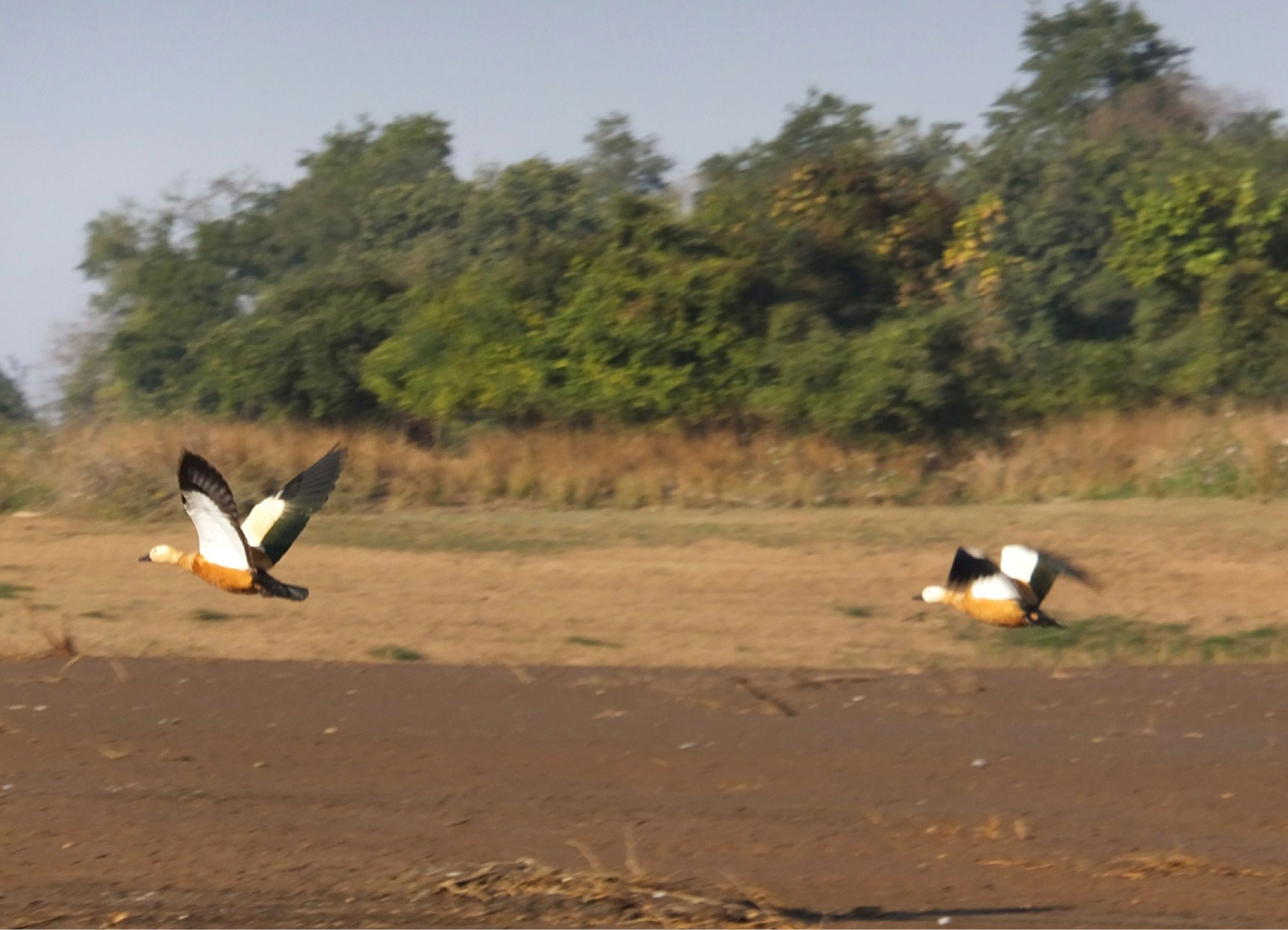 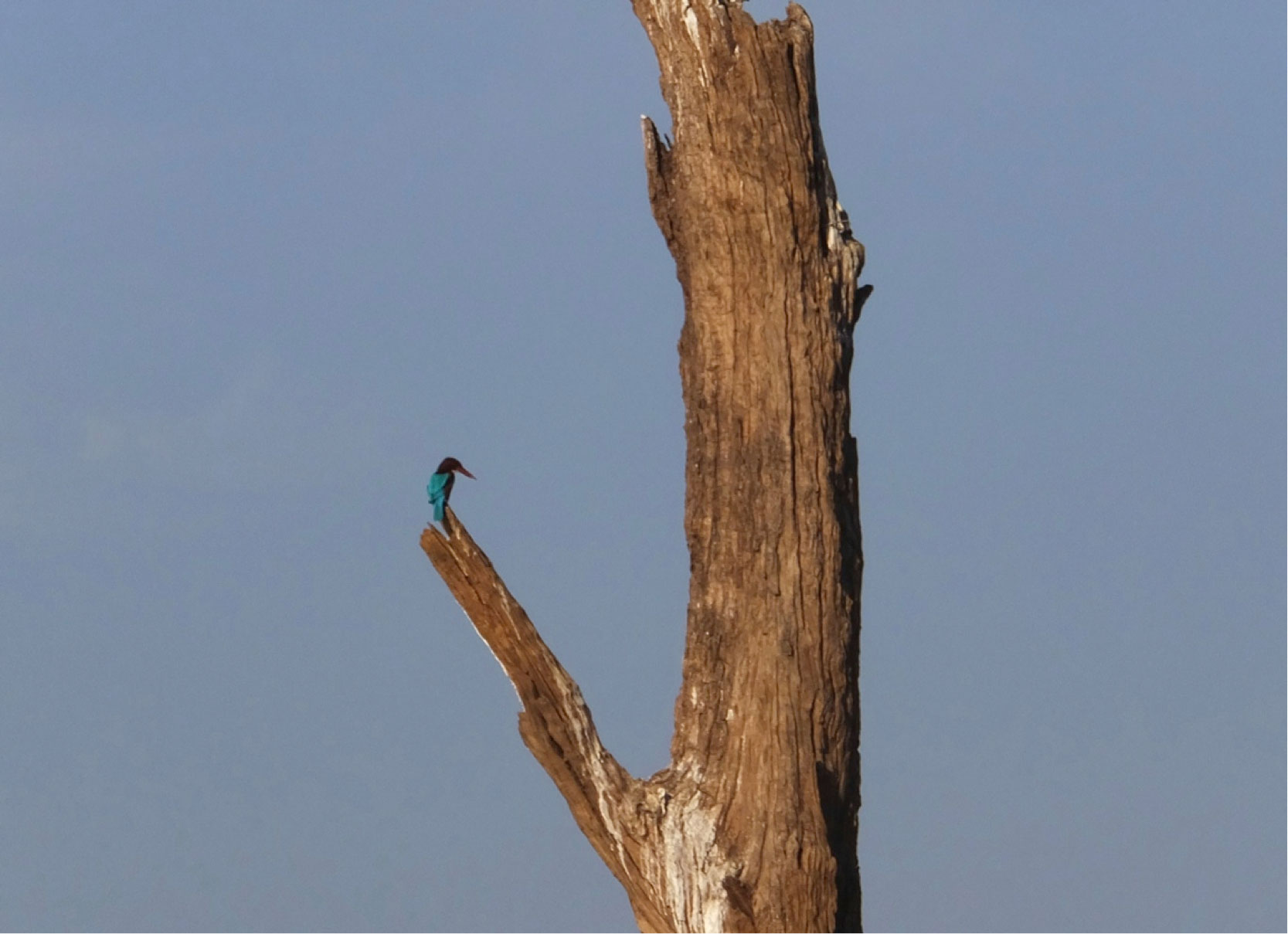 The glorious kingfisher… and finally, the rarest sighting of all… 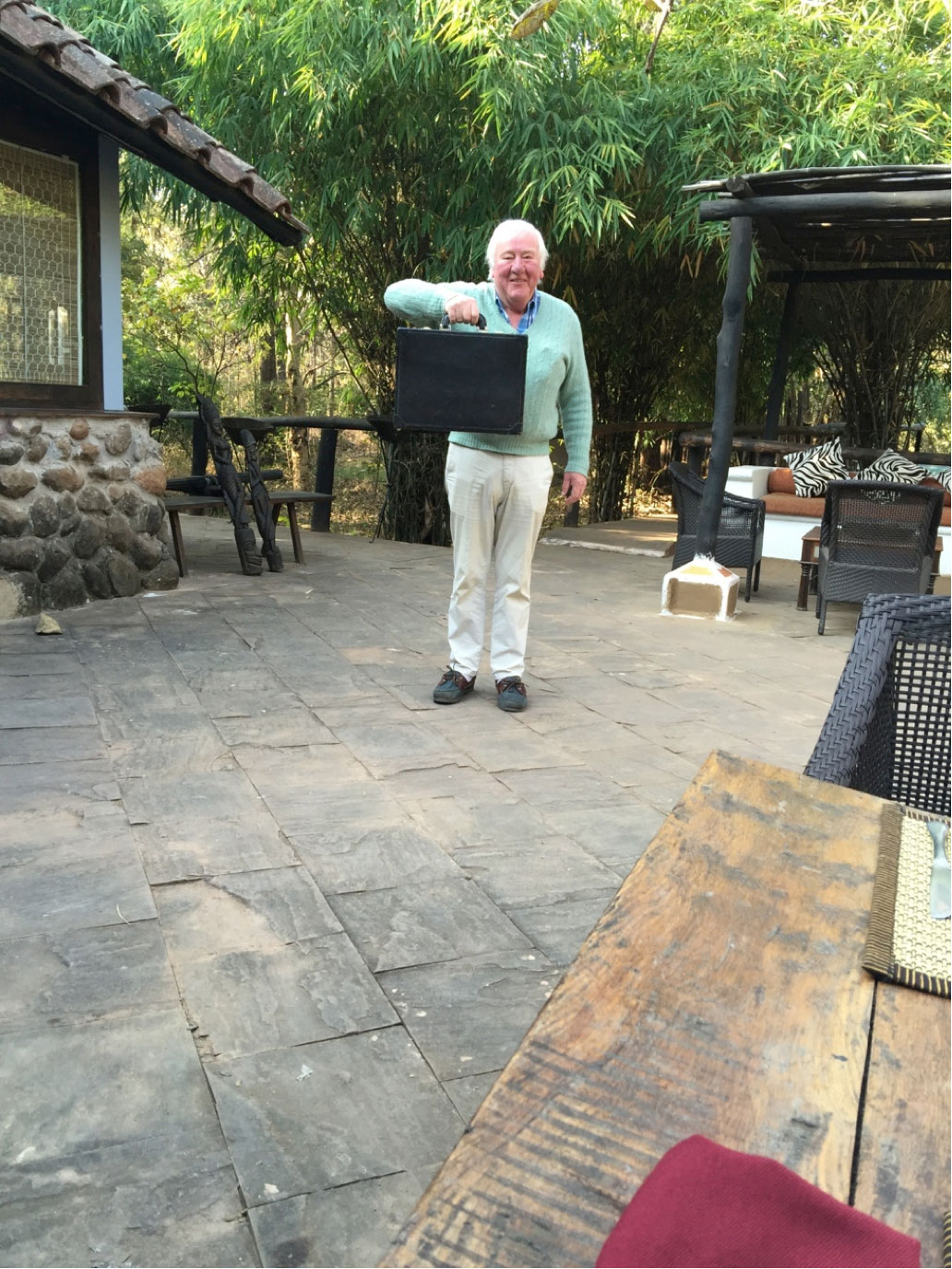