Our 9 o’clock train departed bang on time at noon precisely, just three hours late. It was still foggy in Delhi and Agra, and a train must not hit a holy cow. Hence the slow train. So we had a few extra hours viewing the dusty delights of Gwalior from our balcony, and these hours were eased by the fact that we still had the remains of our secret stash of beer to finish. I had no idea beer would be so enjoyable at ten in the morning, but anything to shut Gwalior out of my mind, eh?

Off to the train station where His Nibs got chatting to all and sundry.. All around us, families were having lunch and passing round chapatis and sauces that smelt quite delicious. Meanwhile, a deputation of the military had been sent to the station to collect some panjandrum who was arriving for India Day, and the young, fluent, obviously clever and ridiculously handsome army surgeon wanted to his their picture taken with him. Hmm. 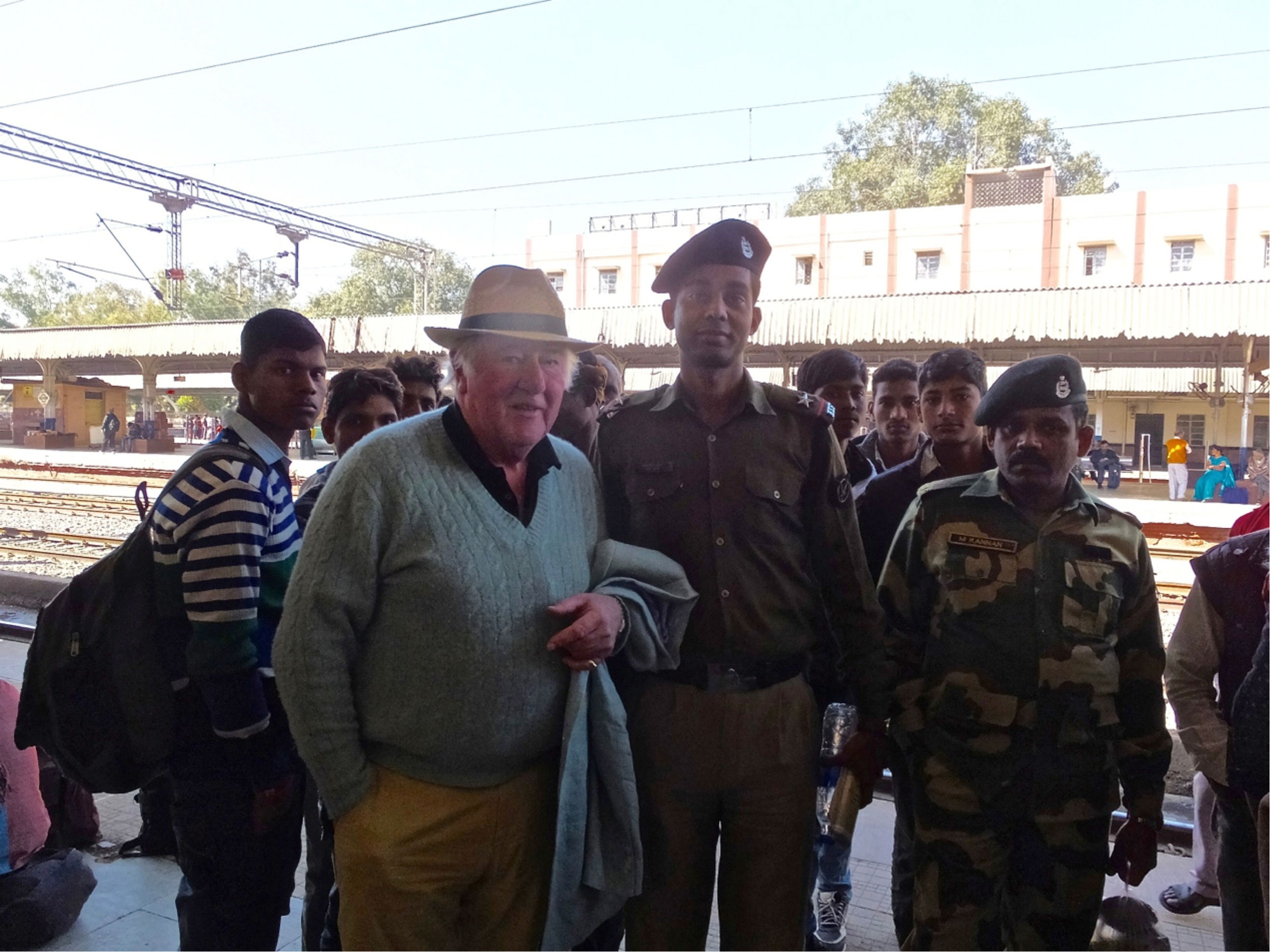 Finally, the train rumbled in and took us away from the sad disaster that was Gwalior. A busy, friendly man with a trolley of joys went up and down distributing water, soup, biscuits, a tray of curries, and finally ice-cream. A German party on the train said they’d been told the food was safe, so once I saw them tucking in, I ate my dal and rice. Very nice. John was disappointed at the lack of live chickens on train, and also slightly put out to find we had comfortable reclining seats rather than the hard benches he’d wanted to bugger his already buggered back on. And he was crushed by the lack of a beer trolley. Thus, it was less of an adventure than John had hoped, but very enjoyable all the same.

Bhopal was everything I had hoped for; a complete surprise and the opposite of what I feared. It’s by far the nicest city we’ve visited because it’s built on seven hills and seven lakes, and the vast lake in city centre – apparently the largest man-made lake in Asia – is like a little sea. This gives the city light, space and charm. Sadly, I never got any photographs of the lake because we were travelling too fast and the sun was beaming straight at us but here’s a picture of the rambling old palace which was given to the city by the local royal family. You do get the sense of the light in the city. 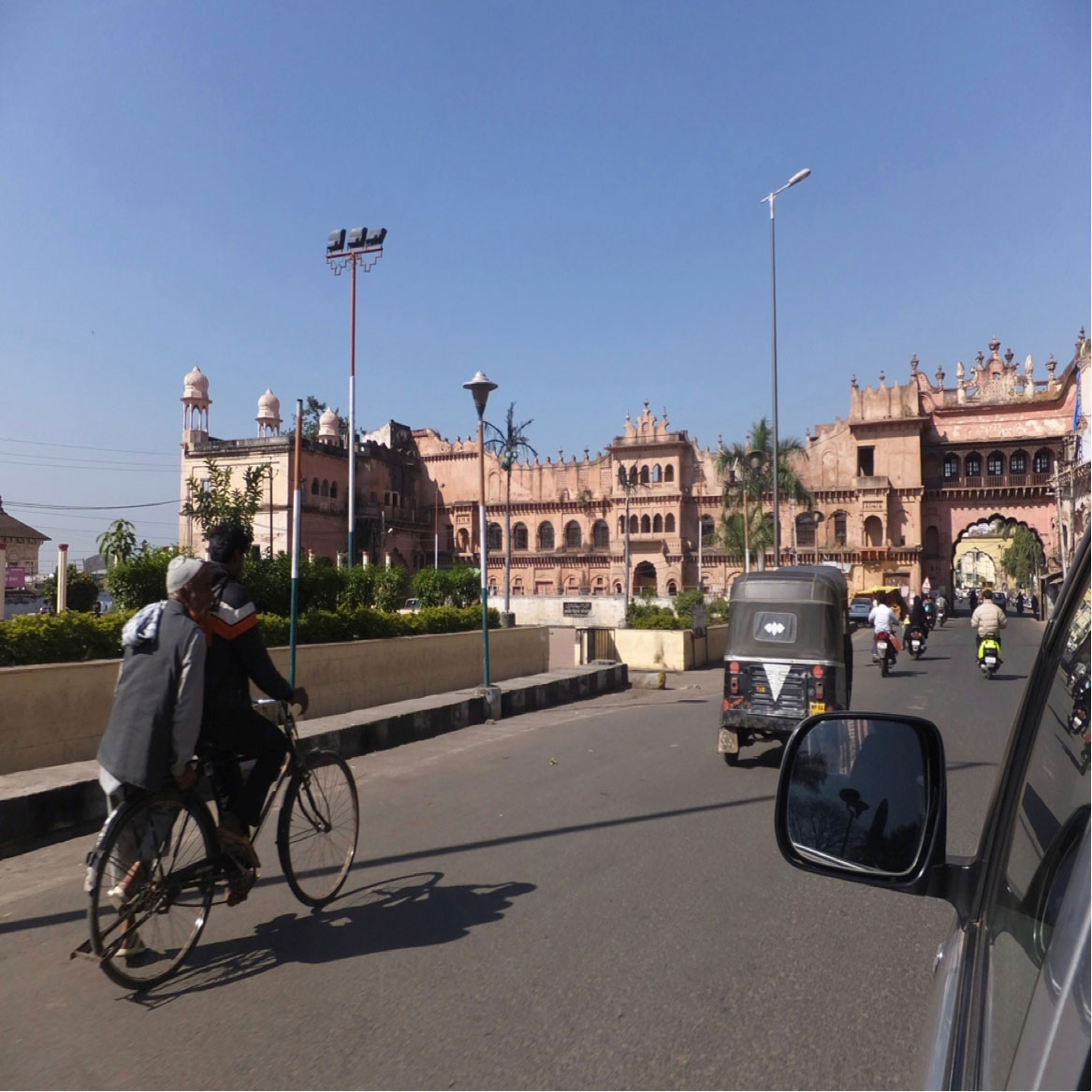 We were booked to take a walking tour of the city at 2, and we didn’t arrive till after 4pm… Apparently late trains are common and particularly at that time of year so it’s a little bit puzzling that this possibility wasn’t factored in by Exasperating Travel, but hey, at least they run true to form. Thus our tour was going to be either cancelled or cut very short as the train was so late. As it happened, it turned out our tour guide had been taken to hospital, but we were so thrilled to see our absolutely beautiful hotel (and to be shot of Ghastly Gwalior) that nothing could dampen our spirits. The owner had even laid on racehorses which paraded round a walking track for the delectation of guests. And if you do ever visit Bhopal, be sure to stay at the Jehan Numa Palace – it’s quite simply terribly terribly good, even if it did get my sex wrong. 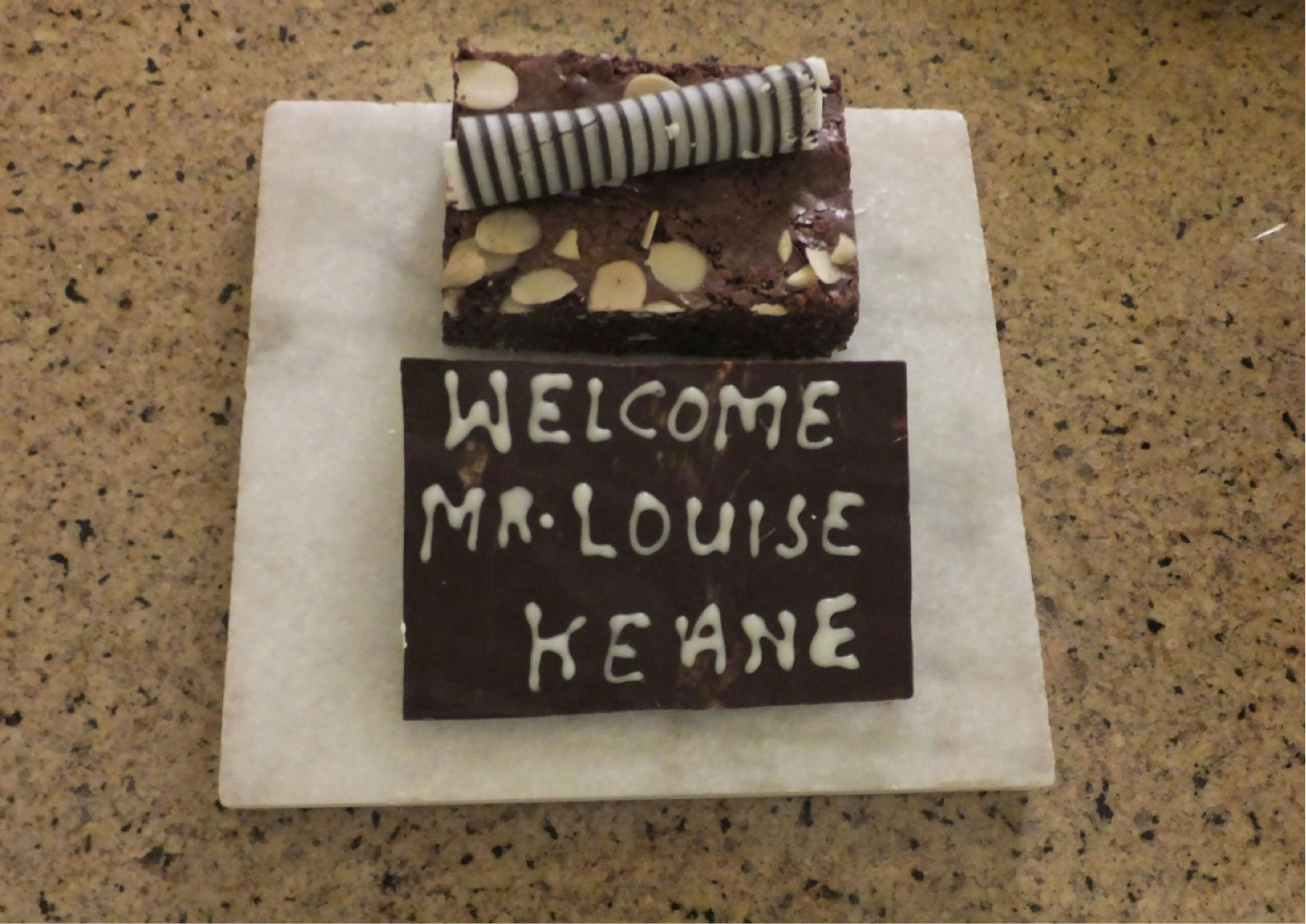 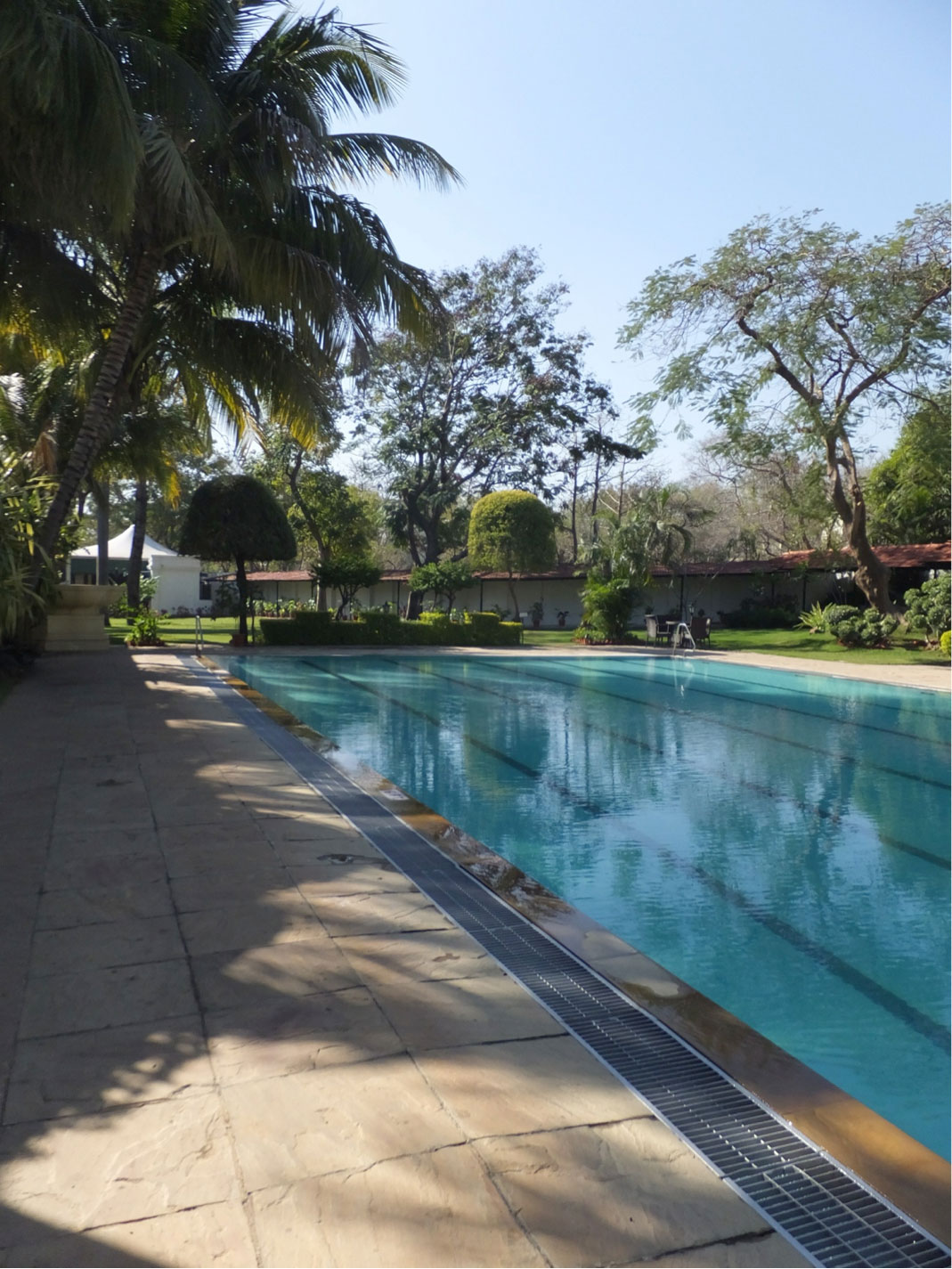 Our tour wasn’t cancelled – hurrah! The hotel had conjured up an alternative tour guide called Saleem, the drinks and marketing manager, who turned out to be a delightful, cultured and effortlessly courteous man. We walked through the pretty old palace courtyards which are now little bazaars selling saris and linens, and he told us about the 4 generations of Begums who’d ruled the area, the only state in India to be ruled by women. Apparently, when the first Begum acceded, the British told her that she was not allowed to rule on account of her sex, and her husband must thus be the Nawab. Then Victoria acceded to the throne, ha ha! The Begum petitioned the British Government, it was eventually accepted that if Britain could have a Queen, so could Bhopal, so she exiled her husband and three successive generations of women ruled peacefully after her. 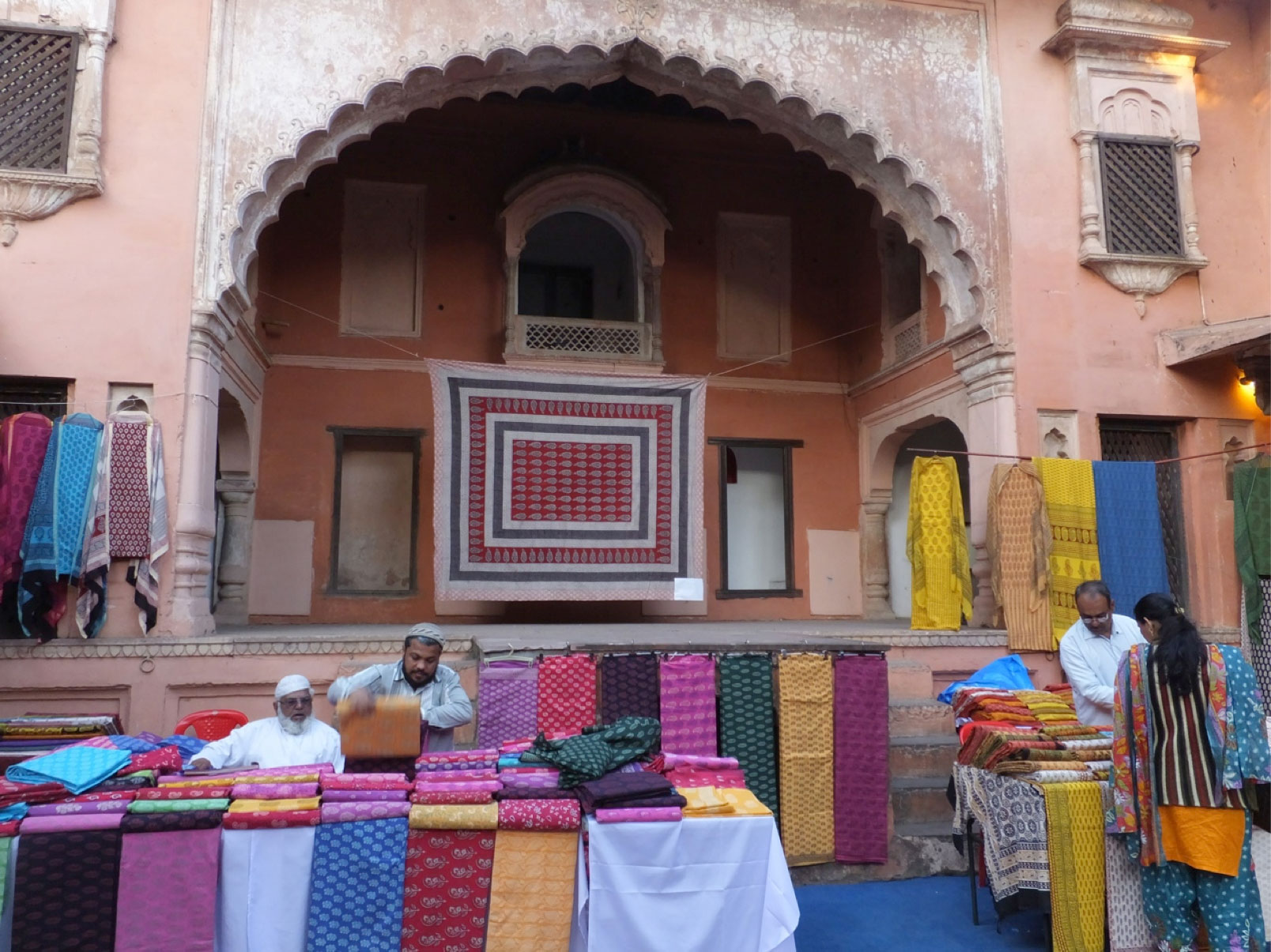 Bhopal is a city of more contrasts than anywhere else we’ve seen. There are no great monuments of staggering historical importance, but it has charm and boasts the largest mosque in Asia – we had a good wander round this and though there were no other women, no-one seemed to object to my presence. An amiable form of Islam seems to be the norm. We drove through a really smart area with large, swanky houses, and I asked Saleem why it was that the very nice and clearly recently built blocks of flats were allowed to get so shabby and untidy in such a nice area.

“Because people cannot co-operate with one another.”

Later we drove along a busy street where people were living under plastic sheeting hung from a low wall. The shanty towns were filthy and depressing, but there’s a satellite dish on every roof. The saddest thing of all was the tip – a vast area bigger than Hyde Park, with a handful of people picking away on the top, plus dogs and cows hunting for scraps. What creatures we are, that we waste so much, and we allow other people to be so poor than they have to pick a living from our garbage.

Shut sadly, so we couldn’t pick up a nice SS uniform for John… 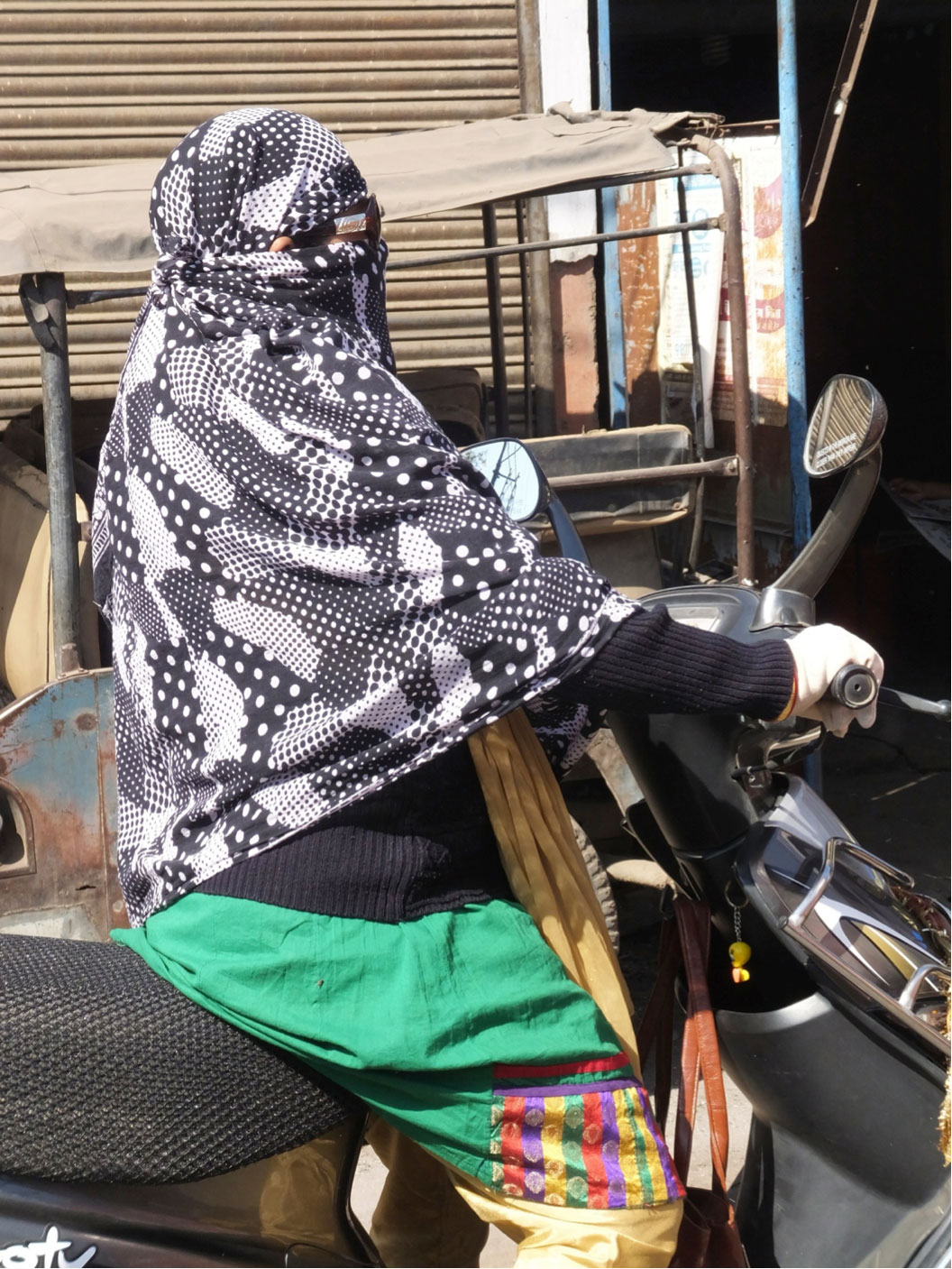 What the well-dressed biker is wearing this year. 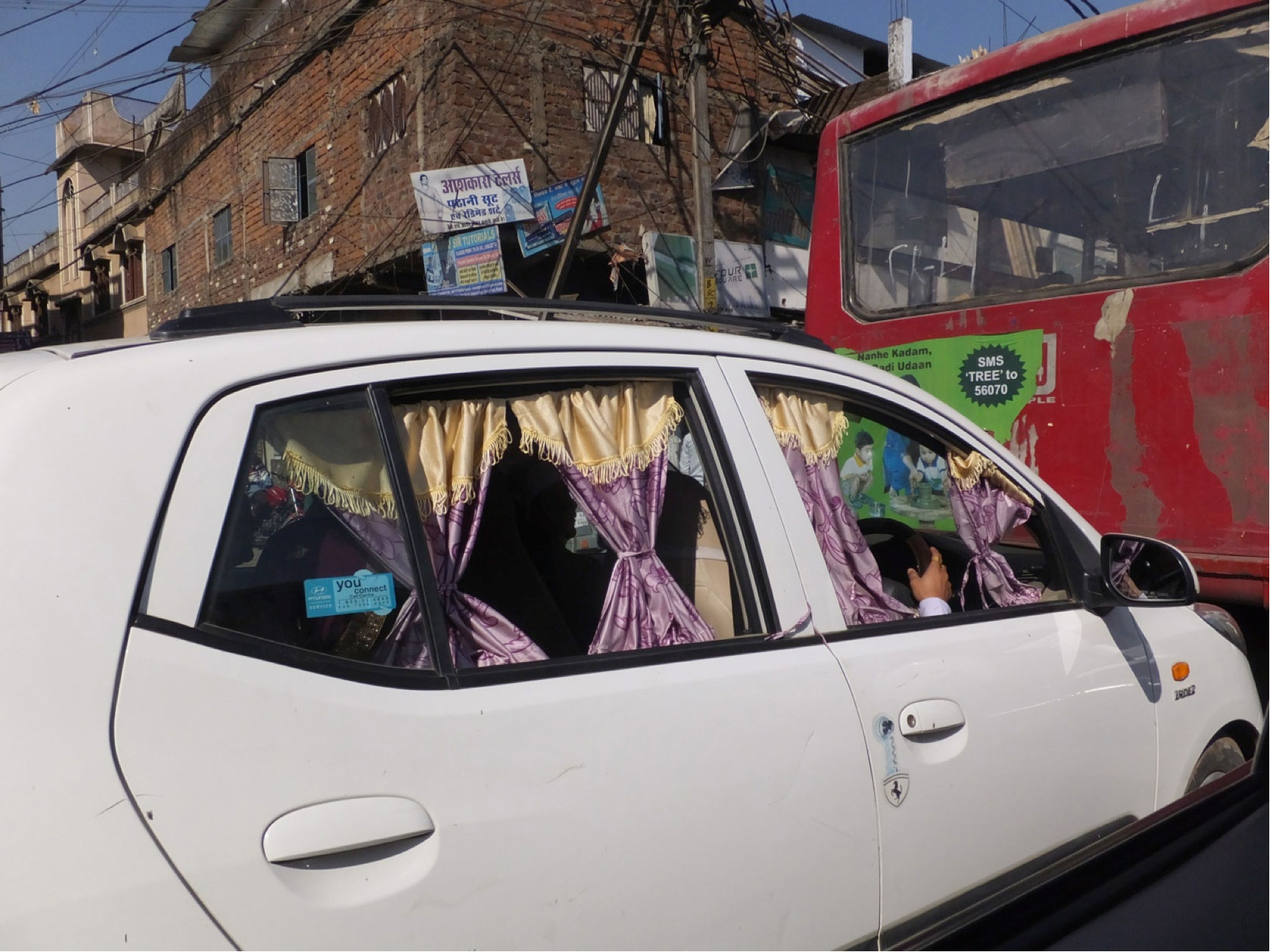 What the well-dressed car is wearing this year… 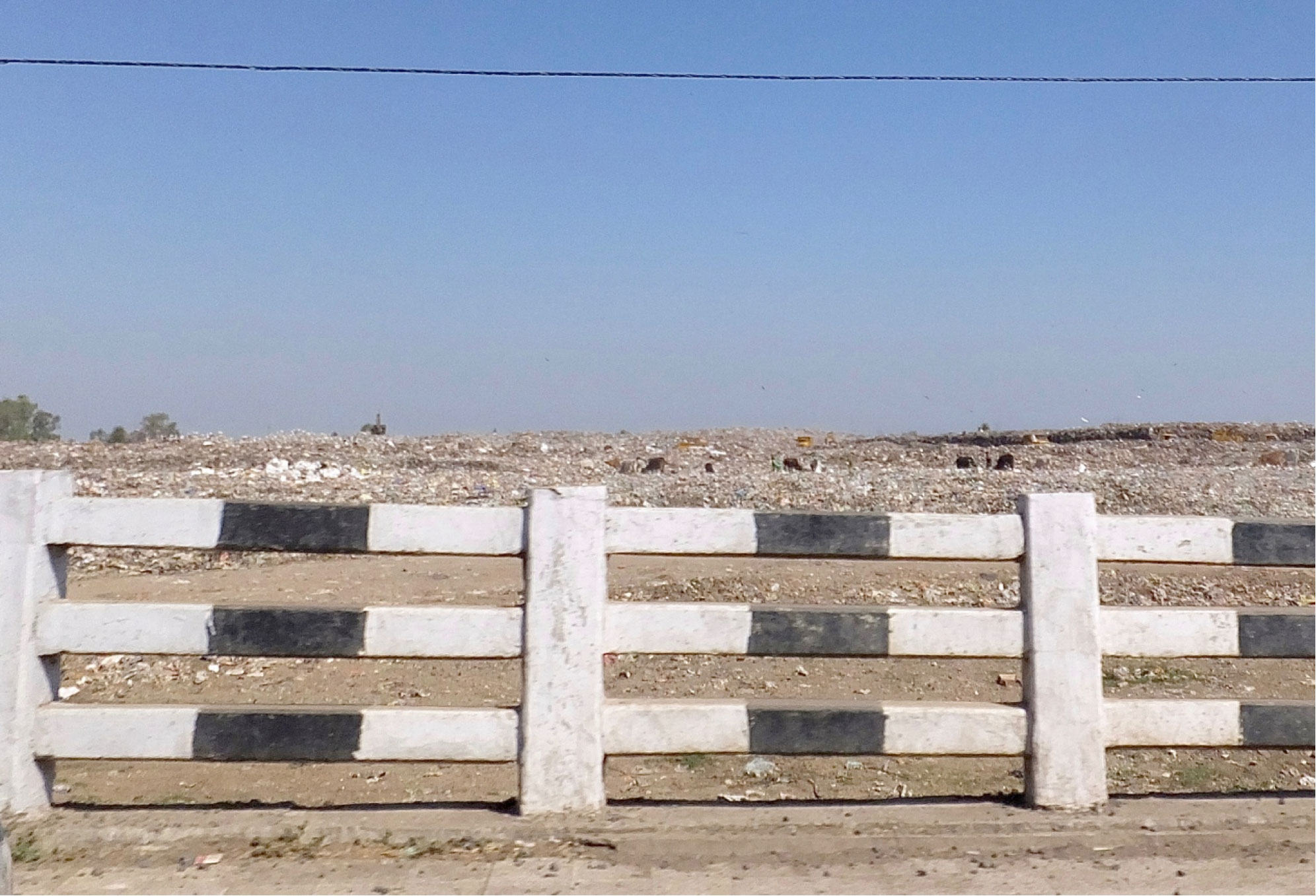 The tip. Cows, dogs and people.

And of course, there was the Union Carbide Factory. Just a reminder – 1984, Union Carbide, owned by Dow Chemicals, took so many safety shortcuts in search of ever greater profit that there was a catastrophic leak of methyl cyanate which immediately poisoned some two and a half thousand people. The deaths continued – estimates vary – with long lingering deaths, spikes in the incidences of cancers, terrible birth defects, etc. We wanted to see the factory and, in particular, the Remember Bhopal Museum which occupies a three-room flat near-ish to the factory, and which was started by victims of the disaster.

To cut a long story short, no-one knew where it was. No-one had even heard of the museum, not even the Travel Desk man at the hotel. Well, off we set. Our driver spoke virtually no English and we had no guide. We found the factory, all right – slogans all over the walls – and tried to go in. No chance. We were very quickly surrounded by perfectly amiable security guards – first one, then two more, then two more appeared from nowhere, and finally another couple came strolling, smiling but purposeful, down the drive. They ushered us out, smiling even more. No, they knew nothing about the Remember Bhopal Museum either.

After a few fruitless efforts, we gave up. Our driver was hopelessly lost, and none of the locals knew of it either. I came away feeling very divided about it. Clearly, the locals want to move on. Bhopal is India’s running sore, and it’s a lovely city with much to offer. But tourists don’t come, and business doesn’t do much here either. You can’t help but sympathise with the pained expression and the shutters that come down in the eyes when you talk about it. It’s 32 years ago, for God’s sake…

But then you read about how the boss of Union Carbide died recently in comfort in the USA, never having been prosecuted. You know how paltry the eventual payout was. You know that the ramifications of the event – the worst industrial accident in the world ever – still rumble on, and that thousands and thousands of lives were ruined. You remember how the news slowly leaked out and how they tried to cover it up. And you see the freshly painted slogans and realise that people are still trying to get justice. So you can’t forget about it.

And as we drove off, I suddenly had the sense that there’s nothing quite so irritating in this world than a do-gooding, middle–class British woman imbued with Portsmouth High School’s liberal values bent on doing Something Useful with her time. 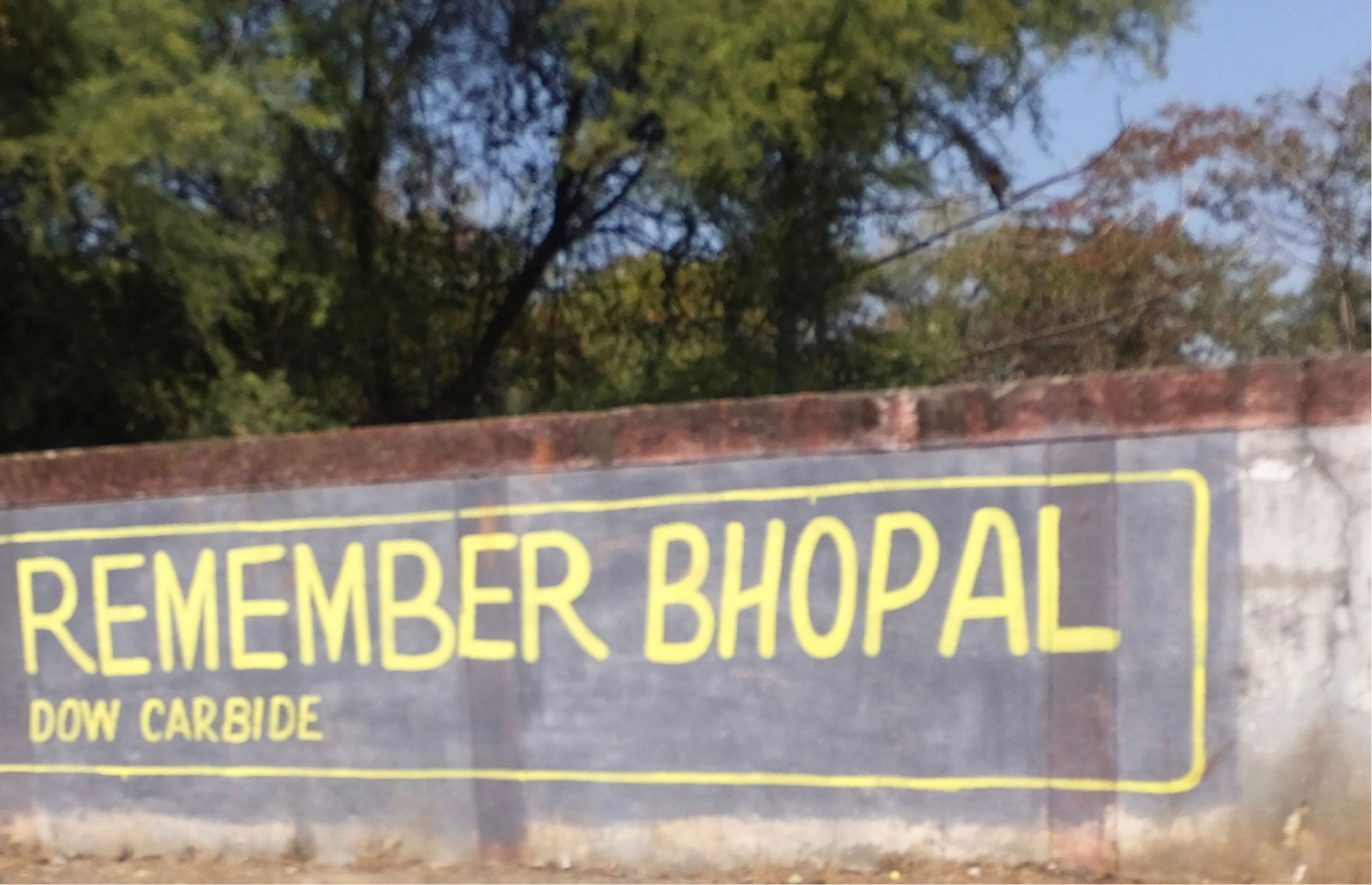