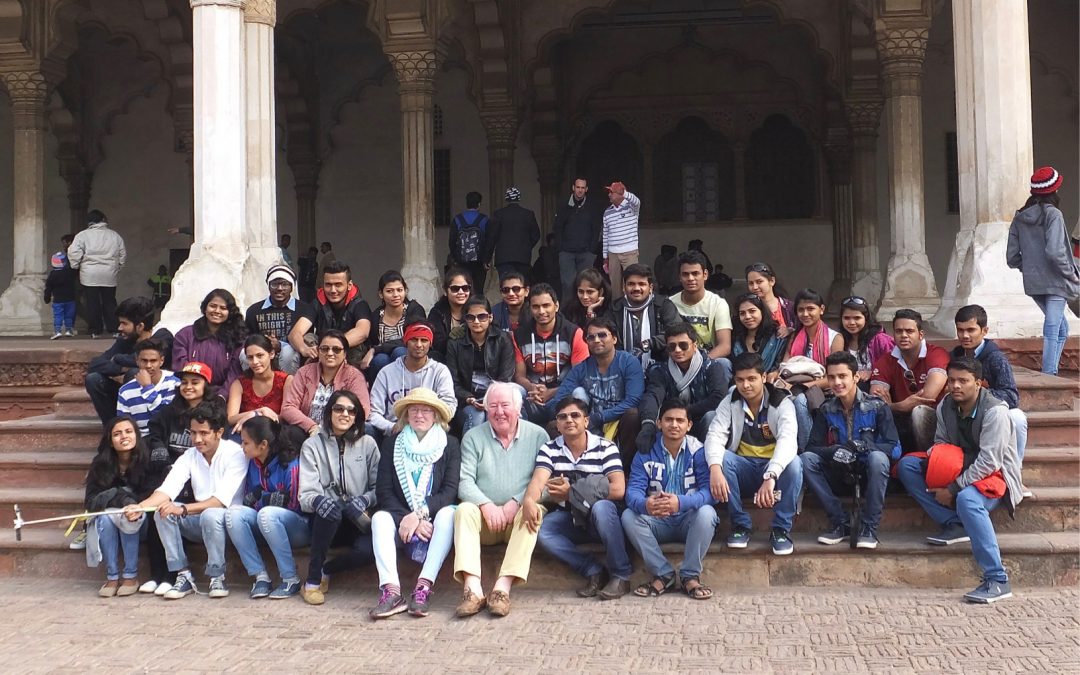 Have you been to Pisa? If so, you’ll have a fair idea of what Agra is like. It’s a shit-hole with a couple of buildings of breathtaking beauty and immeasurable cultural significance.

Unlike Pisa, it is cold here. 2 degrees Celsius this morning. That’s Centigrade in Old Money. Nobody here can believe the weather. Everyone says, “Normally, we have one week of winter, maybe 5 degrees, first week in January. But they say we can expect this for some time. Our weather patterns are changing.” So it’s not only Cumbria, chaps.

Our local guide, Rajiv, met us in his cool shades. “I am great fan of the Queen! Yes, long may she live, indeed. Also the Beatles! And the Bard! And maybe we need Peter Sellers too, goodness gracious me.” Disconcerting, but it turned out he was a great Leonard Cohen fan so I forgave him.

The Taj Mahal is ravishing. That’s really all there is to say. It is, of course, home to two royal ghostettes – Mumtaz herself, and our own Divine Diana. We saw the fabled Bench Of Royal Loneliness and marvelled from afar. It is, of course, constantly be-thronged by crowds taking pictures of where the Betrayed One sat and beamed out her sorrow and isolation to the world, but we didn’t go too near. My bum shall not besmirch the sacred spot. Lèse majestie. And besides, I had woken up that morning feeling distinctly odd and wasn’t keen to do anything extra at all.

Rajiv’s command of English is pretty bloody amazing but at times very puzzling because of the Indian tend-ENcy to stress the wrong syl-LABle.

“We are here in the perry feral rooms, and we can seal a piddery work of great de licker see also.” ???…

Ahhh, after a couple of repeats, I realised it was, “We are here in the peripheral rooms, and we can see lapidary work of great delicacy also…” We spent a lot of time talking about the weird vagaries of the English language. He loved a pun.

“The Police State Department are angry because all their toilets have been removed. They have nothing to go on!”

Next – tea with a courtly Sikh gentleman who now lives in one of the British colonial bungalows. 40-odd of these wonderful buildings survive, and he took us on a tour of the area. Mildly recommended if you’re all Taj-ed out with a couple of hours to kill. He was wonderfully informative and completely charming, but we noticed how peremptorily he spoke to our driver. There’s always someone lower down the food chain to kick.

Back to our hotel where there was gin but I partook not. Nay, but it is true. I sipped gently at a brandy and soda and looked glumly at the buffet, then headed to bed with a bug. Not the full Delhi belly, more Delhi bell. A uni-directional infestation, in other words. But I was weary and feverish with a strong need for handy sanitation. We suspect our lunch place in Delhi yesterday. I greatly regretted eating more of the rather revolting dumplings; as I mentioned, John only had the one. So he merely had Delhi Be while I suffered rather more. That’s all you need to know about our digestion. And please do not be concerned – we are travelling with a small branch of Boots in our luggage.

My careful medical provision, of course, has had ramifications for our attire as the excess of pharmaceutical goods mean less room for clothing. And the unseasonal and unpredicted cold (yes, I Googled the long-range weather forecast, it was supposed to be 19-23 degrees at worst) mean we packed far too few warm clothes.

Thus, the next day, I left the hotel for our excursion dressed as Nanook of the North. I was wearing:

I’m going to be a glamorous memsahib in the photographs, aren’t I? I was, however, feeling 60% revived, and we trotted off to the Catholic Cemetery which was mindboggling. I’ll say this for the Catholics – they’re bloody brilliant at absorbing themselves into the local culture because there were Mughal style tombs everywhere. One enormous mausoleum built in the style of the Taj Mahal in red sandstone to house the remains of a Dutchman called Captain Hession, who died fighting the British, erected by his estranged wife after he died in battle in the service of some Mughal or other. She must have loved him an awful lot.

We wandered around for an hour, and were moved and saddened by the heartbroken inscriptions on the gravestones: three children died in infancy to the same couple, numbers of young women dying in their twenties, and few living to the ripe old age of 70. It gave us a view of what times were like for the Europeans who came here – life out here definitely picked ‘em off young. 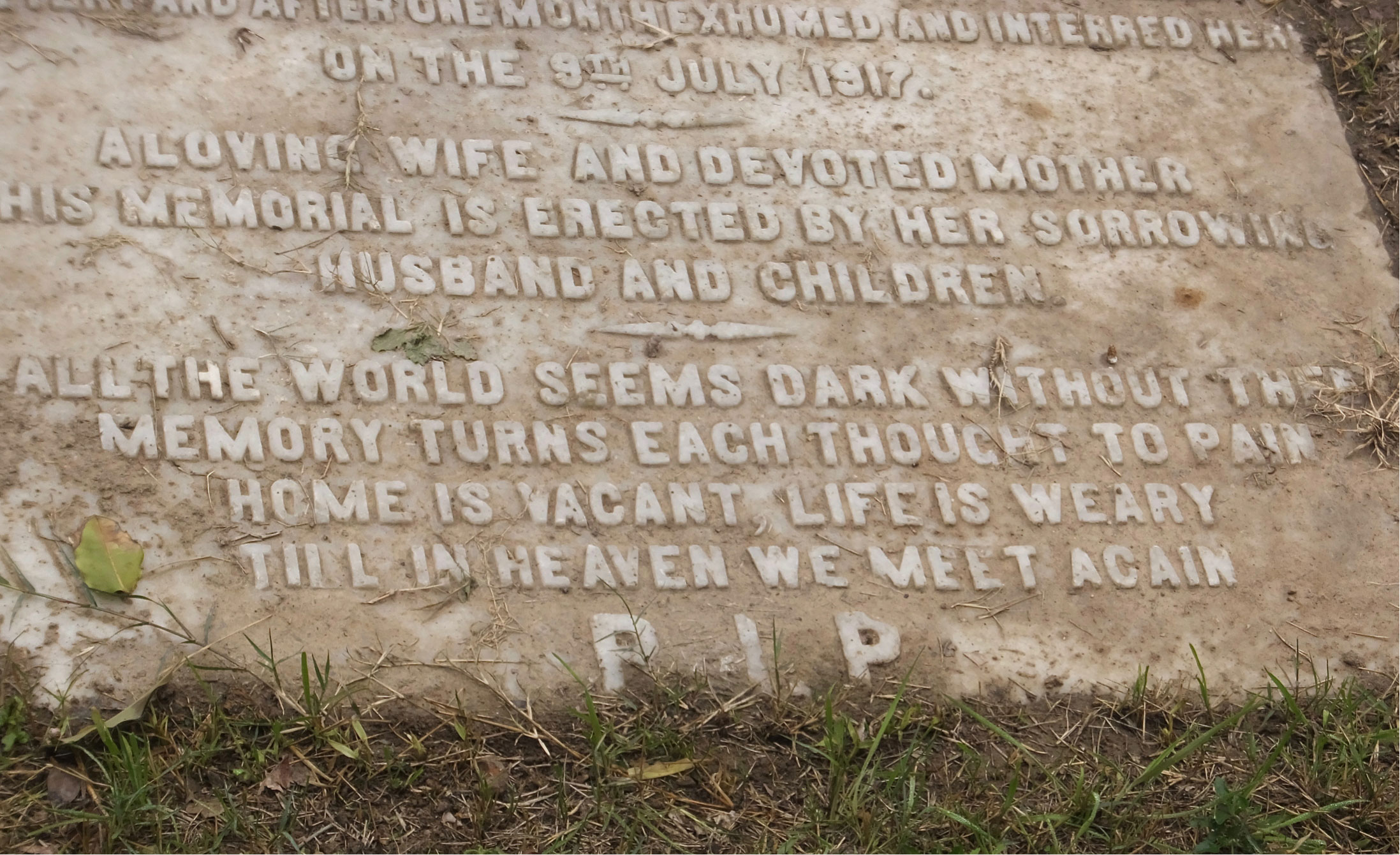 Then the Red Fort of Agra which knocks the other Red Fort of Delhi into a cocked hat even though it boasts far fewer pigeons. Stu-bloody-pendous. But indescribable and unphotographable – at least, with our equipment. We saw the rooms where Shah Jehan was kept under house arrest by the son who deposed him – he asked to be immured where he could see the Taj Mahal and so they imprisoned him on the river side of the fort, with a superb view of the mausoleum. At least, we gather it’s superb when there’s no fog.

India will upend you in a nanosecond. Just when you’re feeling entirely monumented out, and the prospect of yet another lecture in relatively impenetrable English on the Mughal emperors of yore drains you of the will to go on, something will happen that makes you love the place. We were standing in one of the many courtyards when there was a small commotion. A large group of friendly schoolkids of about 16-18 beckoned us over to be in their photographs. I made them all hoot with laughter by shouting “CHEESE”, so then they all shouted “CHEEEEESE!”. Suddenly, my menu Indian came to me. “PANEER” I shouted, even louder. Making foreign kids shriek with laughter is quite a kick. We ended up having endless photos and selfies taken with various groups. Goodness knows what they will tell their parents when they get home. “We had photo taken with hefty old white lady like Rutherford Marple woman, and nice old gentleman with red smiling face, and she knew the Indian word for cheese…”

Yes, it’s little occurrences like that that will remain with me more than the monuments, the crazy, charming, sudden friendliness of the people.

It occurs to me now that these moments are precious because one cannot relax into the local ambience here in the way we did in Indochina. It’s not just that we are traveling in luxury and staying in many-starred hotels, it’s the inability to wander down the road and find a congenial bar where you can sip a beer and watch the world go by. And possibly even chat to someone. We haven’t seen any such bars, and the only one we have been to gave me a tummy bug – and there’s the rub. You just don’t risk it. I scour TripeAdvisor (sic) for some English reviews which might reassure me, but I find none. We are whisked down the streets in our limo and never stop and stare. So it’s a hermetically sealed passage to (or rather, through) India, and we do not only connect.

And so that was Agra.