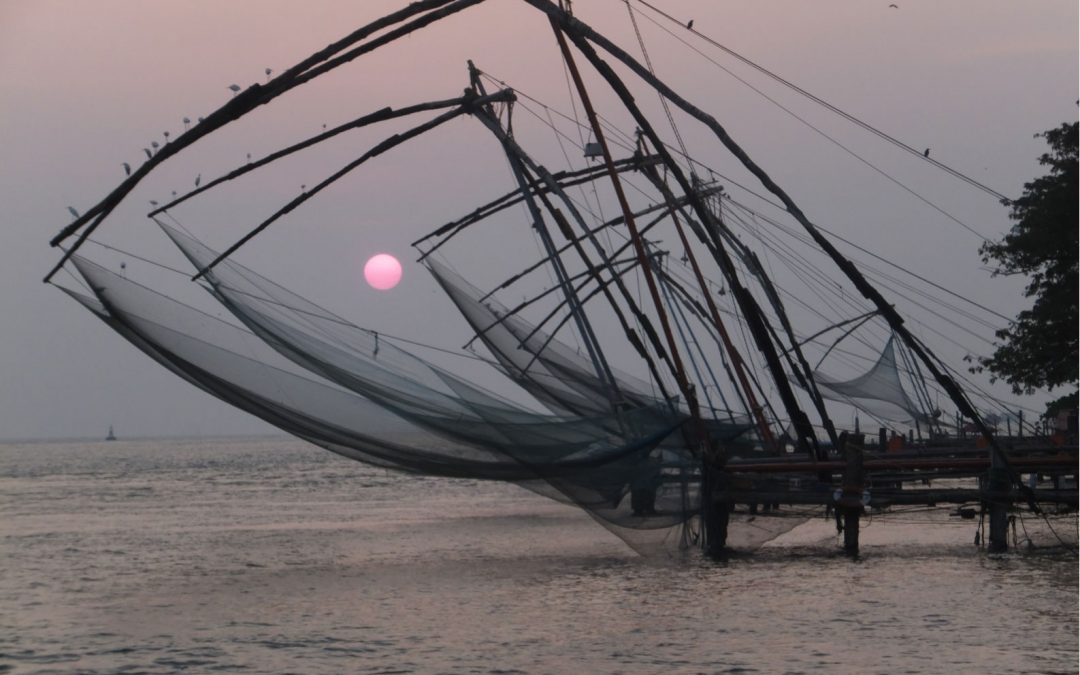 Really, you don’t have to read this – you won’t be tested. Delete at will. It’s my way of making myself write a kind of diary of our holliers.

Our last night in Marari beach was a hoot. We’d discovered that the daily gathering around the tea trolley was the social event of the day when you could suss out the other guests but also escape quite easily if they were dullsville. We started chatting to this rather jolly couple called Craig and Vicky Crosbie – and of course, he was an actor. Very bright man, (I suspect Bill Nighy stole his career) when he wasn’t getting enough work, he qualified as a criminal barrister…! Turned out he knew Andrew Neil (the actor, not the journalist, directed me at drama school and with whom I rather foolishly flung twenty years later). As if that wasn’t surprising enough, they told us they’d become great friends with an actress they’d met on holiday called Sue Kelvin, who of course I (and a few others amongst you) know well. We had supper with them and very entertaining it was too, hearing all about their hilarious, dysfunctional families and realising our own weren’t so bad after all.

We moved on from lovely Marari Beach to Cochin after 5 sybaritic nights to another equally gorgeous hotel where our suite (suite, my dear!) awaited. A quick sunset cruise awaited from our hotel jetty, and a dismal young Indian woman gave the running commentary over the throb of the engine. It didn’t help that she was extremely conscious of having slightly buck teeth and thus (a) talked with her mouth virtually closed and (b) never smiled.

None the wiser, we bobbed happily around the harbour and had a closer look at the gantries, tumbledown harbour buildings and huge Chinese fishing nets. Best of all, hundreds of ibises and, I think, egrets, standing on the floating pillows of fallen vegetation as we motored by, and then gently going to sleep on the branches of the trees as the light disappeared. 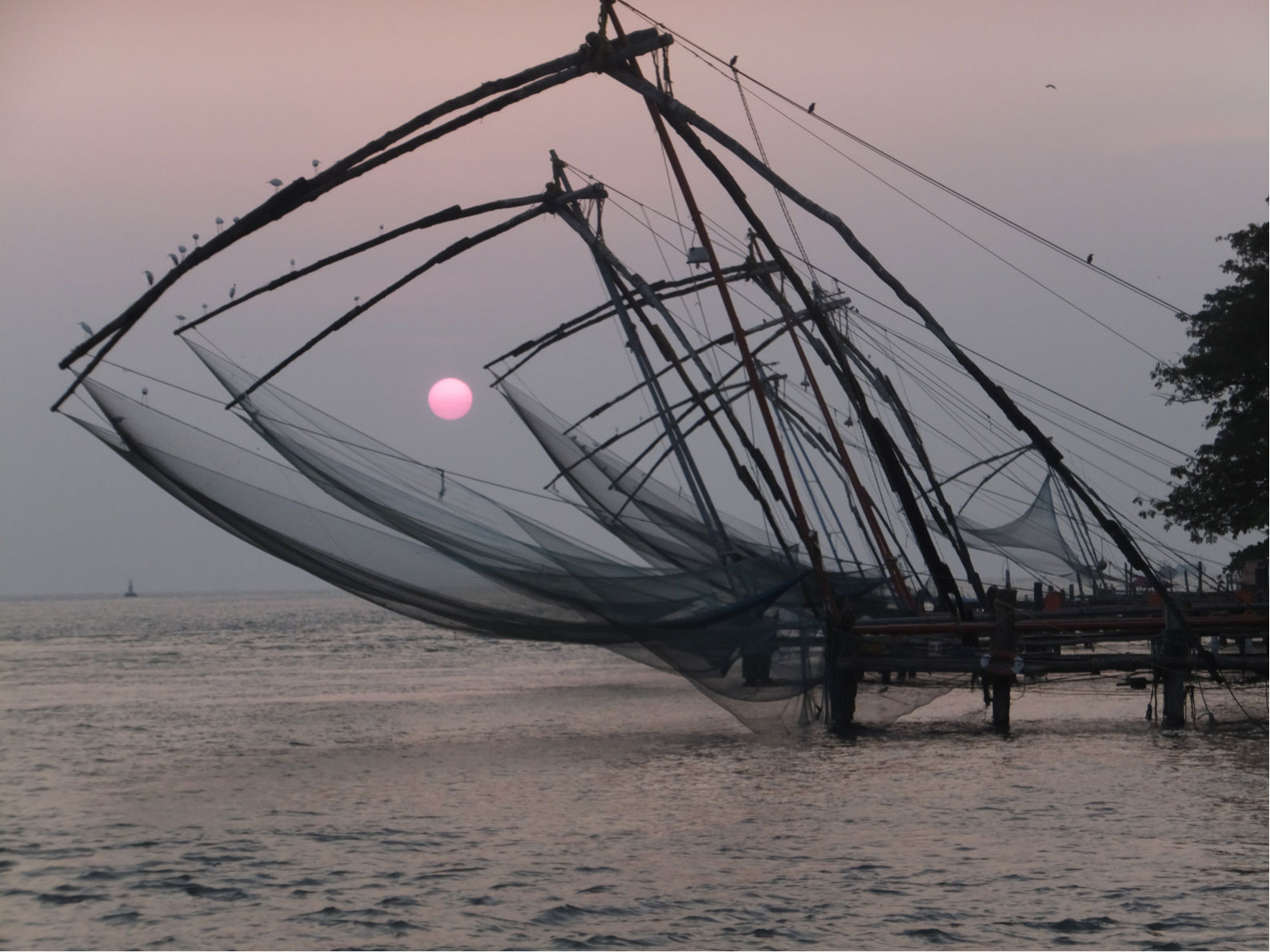 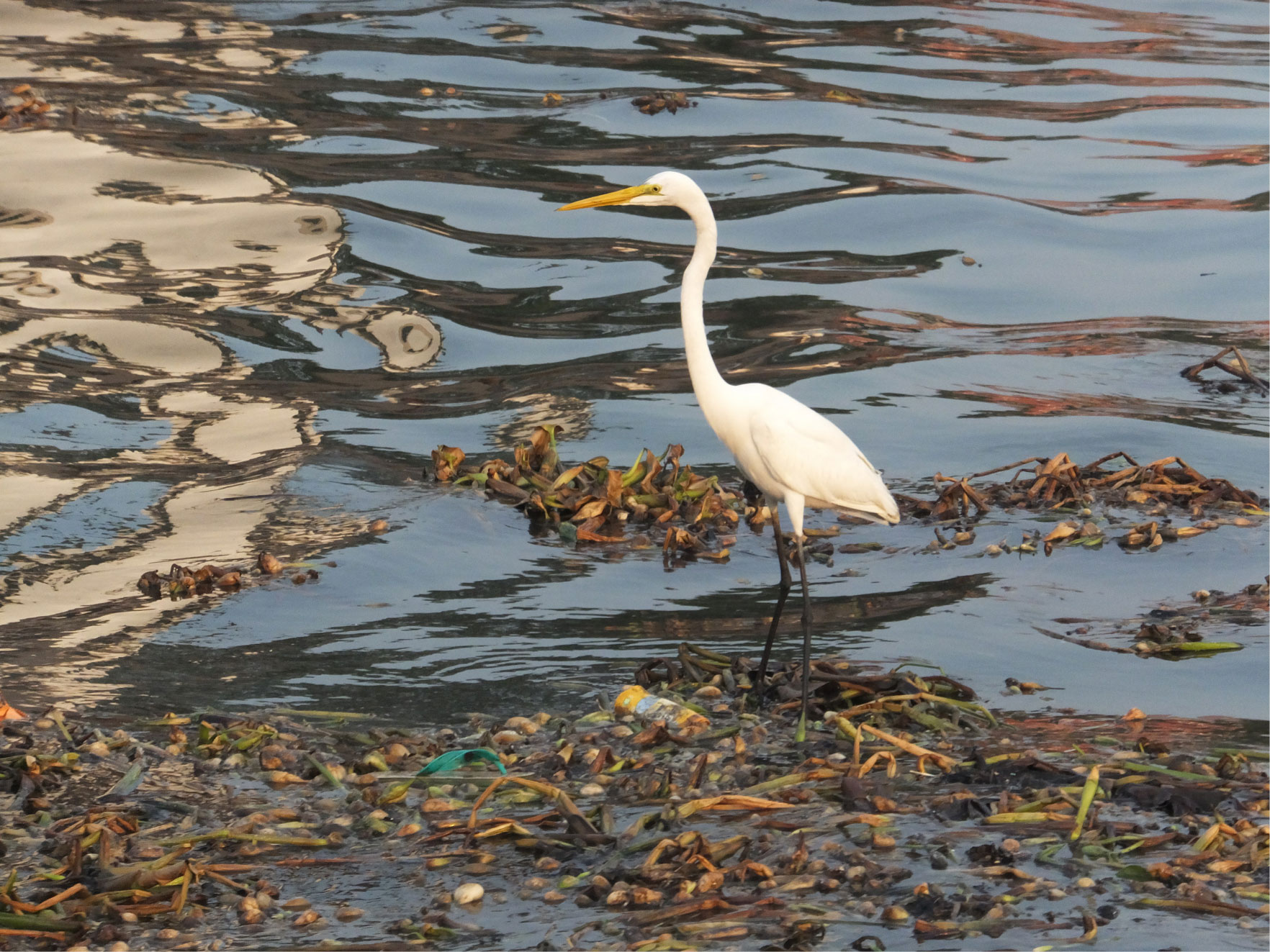 Up to our room. Oh, how we throbbed in anticipation of that long awaited G&T on our balcony which overlooked the pool and harbour beyond. FEKK! No gin to be had there either! No spirits whatsoever! This is getting silly. Ah well… Quick, hail a tuktuk! Here is a picture of John at the Garment Liquor Store. (It is really called the Government Liquor Store, but the V in Government is elusive in Indian pronunciation, and thus it shall be the Garment Liquor Store for ever more.) 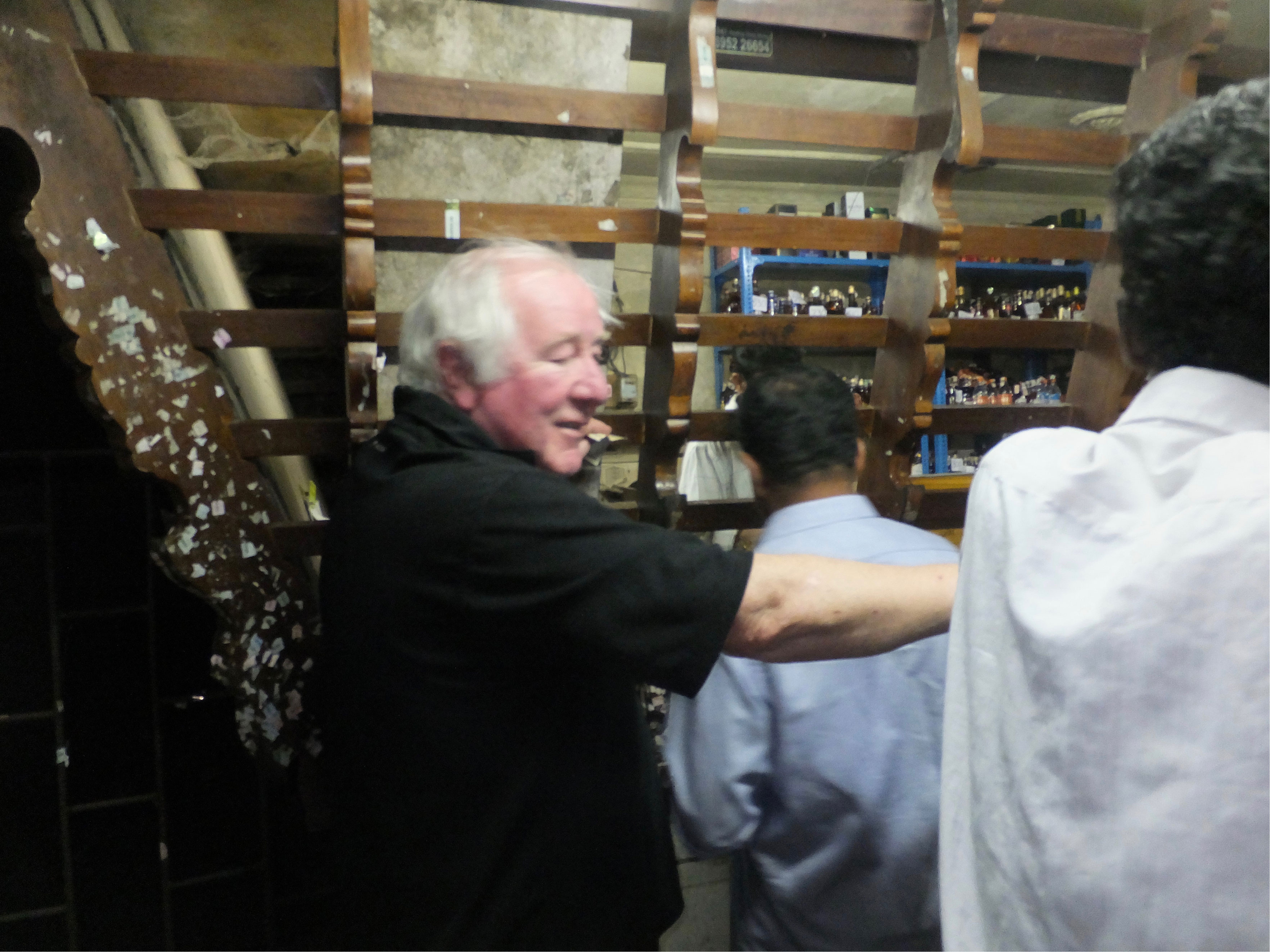 There we found out the bitter truth – there is no gin in Kerala. No fekking gin at all. Not even for Ready Money. So we made do with half a bottle of vodka, some fresh orange juice sent up, and order was restored. We drank our chotapegs (oh, I’m so Raj!) on the balcony and watched tankers of every size and rustiness chug slowly by. John had his eye on the vast number of containers – some years ago, he and a friend invested in 200 containers and he’s had a fondness for them ever since. Well, it takes all sorts. 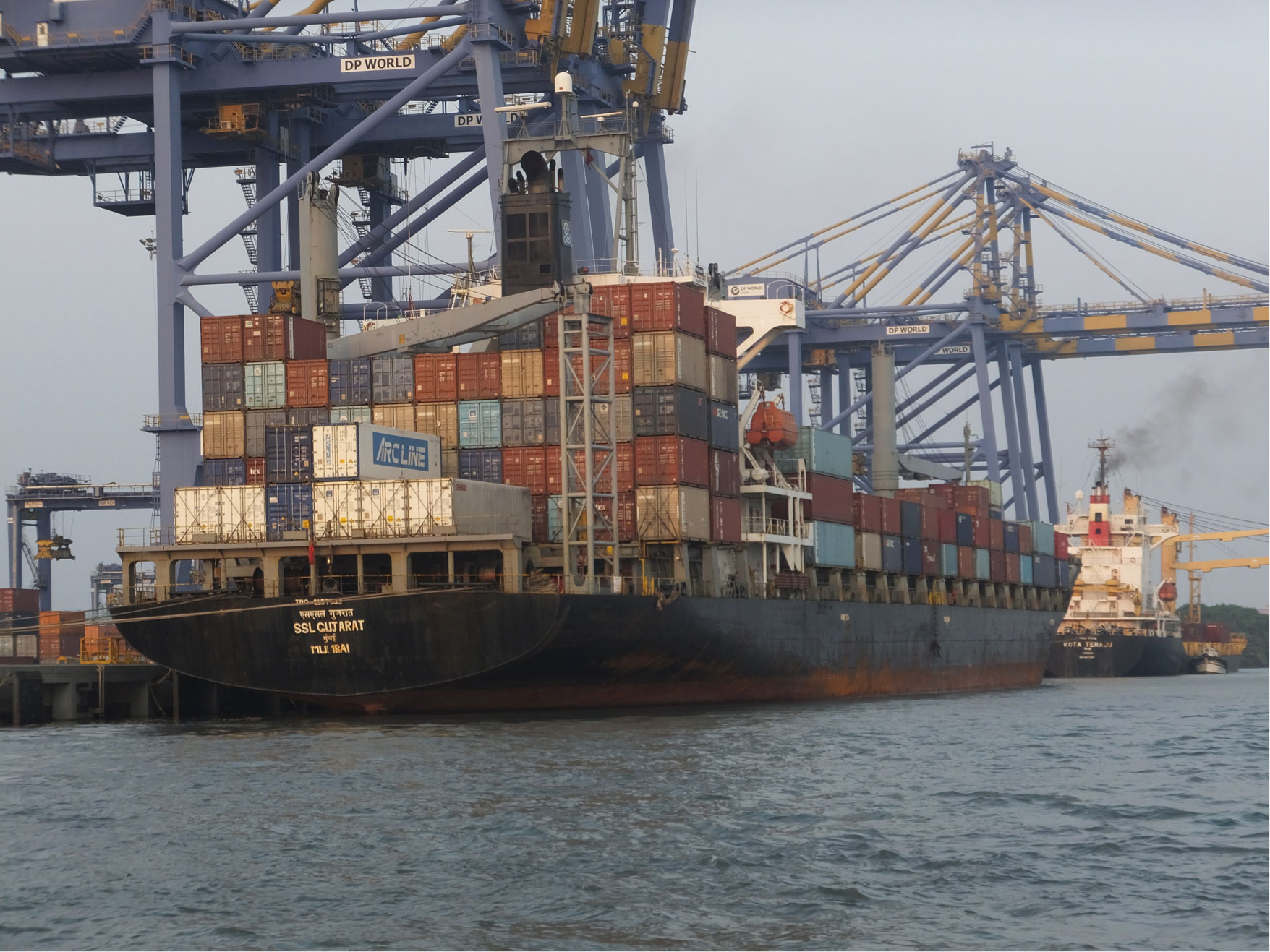 Next morning, we met up with Babu, the rep for Creative Travel. We’d met him extremely briefly before shortly after we flew in from Abu Dhabi. He’d met us on the road – literally. He’d arranged with the driver to stop en route and hand us all the documents pertaining to our Southern India trip. Through sleepy eyes, we’d said hello and thank you, and that was that. But we had spoken to him a couple of times through the week when he rang to confirm this or that arrangement.   So there we were, sitting in the lobby with a coffee and Babu launched in.

Babu            Yesterday, you did not haaaave your sunset cruuuuuuise, so I have rearraaaaaanged it for today.

This went on for a while. Transpired we’d been on the hotel’s complimentary sunset cruise, and he’d forgotten to tell us about the other cruise which the Expensive Travel back in the UK had booked for us. Naturally, we didn’t want to do the same thing twice – and besides, we had the vodka to finish, so our sunset experience that day was already spoken for.

Suddenly, it got a bit uncomfortable. It was, apparently, my fault that we weren’t told about the sunset cruise.

Babu           (slightly outraged at the slight on his efficiency) I was not aaaable to tell you because you were asleeeep!

This quite clearly didn’t wash with us, so he tried a more sympathetic tack.

Babu           (Suddenly oozing kindness) Yeeeesssss, you were so sleeeeepy when I met you aaaafter your journey from London, I did not want to disturb you with detaaaails of your trip.

Then it got even more uncomfortable. He told us it was a much better cruise and almost tried to bully us to going on the cruise. It ended with him wheedling, begging, pleading with us, and saying, “What is it to you? You are rich tourists! One cruise, what is it in England, maybe £30 each? It is nothing!” Finally, he offered us 5,000 rupees in “compensation” – well, as a bribe, actually – saying he’d lose his job if we told the company about his mistake. Exaggeration, I think, but hugely uncomfortable and it left an extremely sour taste in the mouth.

Old Cochin is not quite the fabulous old colonial spot I expected – it’s a bit tatty and run down, but interesting enough. We saw a couple of old churches, and as usual, the Catholics won the Bad Taste Award. 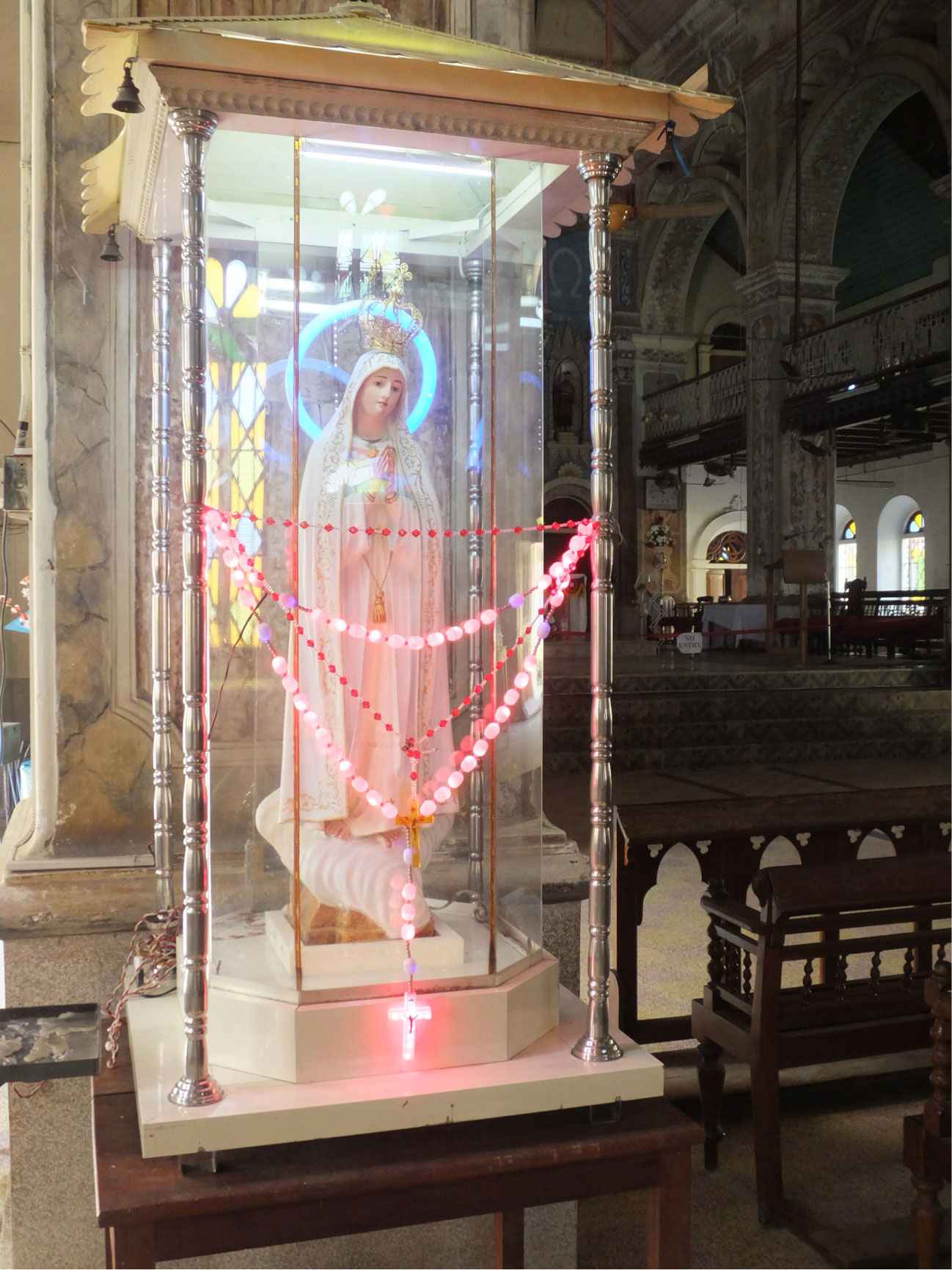 Also the Synagogue – the city was once home to a Jewish community of 10,000 or so; now there are only 6 Jews in Cochin, the youngest being Sarah, unmarried and aged 42, who has stayed to look after her aged mother. The rest evaporated gradually after Partition (1947) and the establishment of Israel (1948), and now there aren’t enough Jews to worship in the proper way as 10 are needed (a minyan, or quorum) to perform the proper rituals and prayers. Sad.

Finally, a fascinating trip to a vast laundry to watch commercial launderers Indian-style, beating the laundry and their lives away in old stone baths, and using a 12lb iron heated with burning coconut shells. 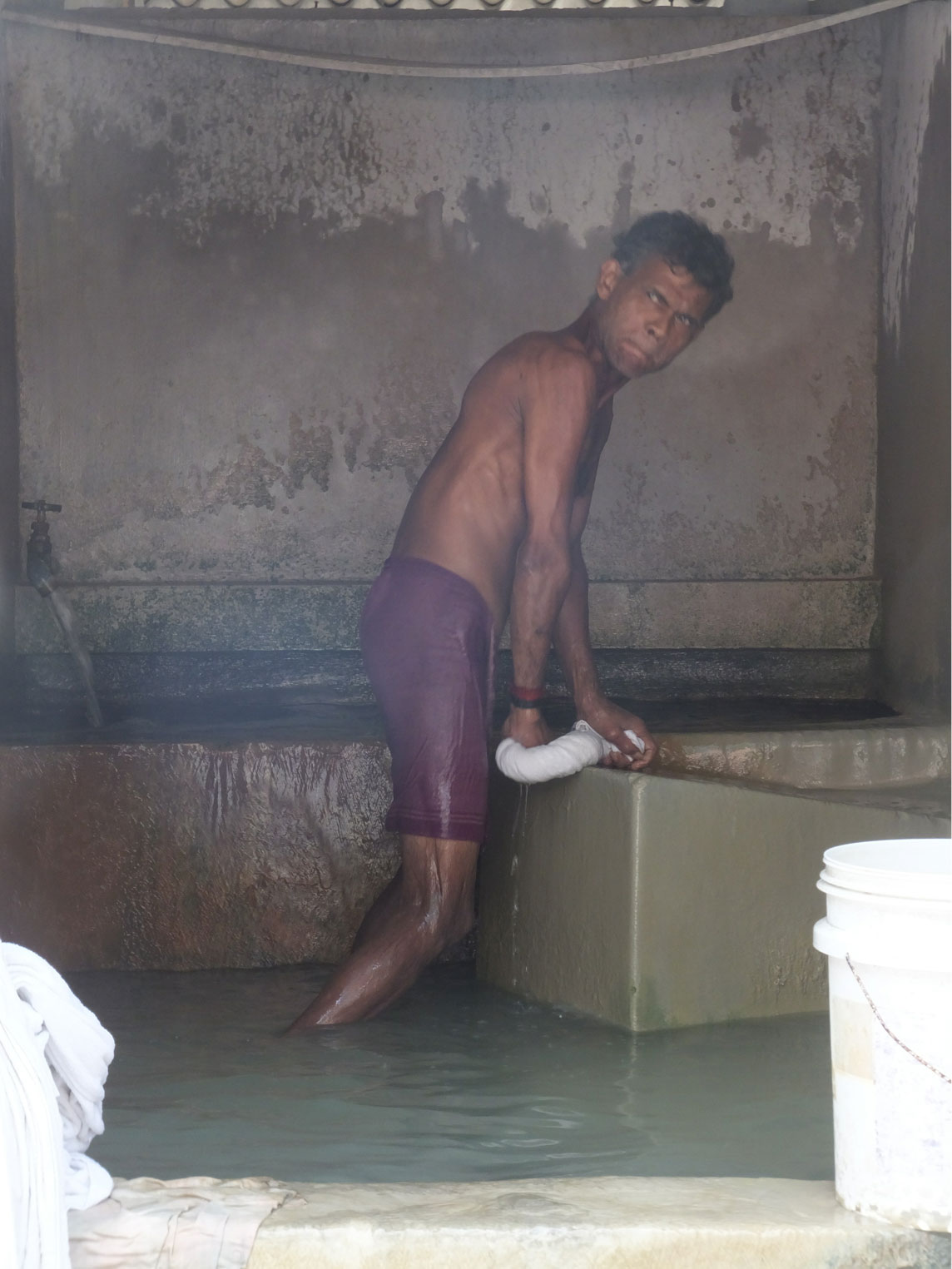 The highlight of our visit to Cochin was a home visit to a lady called Nimmy Paul who showed us how to cook three dishes, which we then wolfed down. Apart from the fact that her recipes had been cleverly adapted to cook in no time at all, she and her husband were completely charming. They’ve been doing this since 1997, but there was no sense of “Oh, here are yet more tourists asking about life in India”, it was more like meeting a delightful couple in a hotel and spending a couple of happy hours in intelligent company.

If I’m honest, I don’t think a trip to Cochin is vital to your enjoyment of India, but it was a pleasant enough couple of days. Apart from the lack of gin, of course.

On then to Delhi. Back to you in a couple of days.